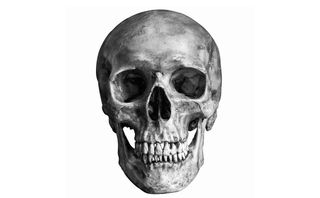 In a world where a mathematical temptress known as the golden ratio is supposedly hidden in every beautiful site, from a snail's shell to Greece's Parthenon and Egypt's pyramids, it's perhaps not surprising that humans have long tried to link it to … well, humans.

But the golden ratio is more urban legend than secret key to the universe; it doesn't describe a snail's shell, the Parthenon, the pyramids or beautiful faces, as popular belief would have it. The same goes for a new study that suggests the golden ratio exists within the human skull: Anatomists say it's nonsense.

The golden ratio, also known as the divine proportion, is an infinite number that is approximately equal to 1.618 and is calculated by dividing a line into two unequal parts, such that the longer part divided by the smaller part is equal to the entire line divided by the longer part. (a/b = (a+b)/a = 1.6180339887498948420 …)

The golden ratio does exist in some places, such as in how seeds or leaves of certain plants are arranged, and it has inspired some art, such as that of Salvador Dalí. But many previous studies have also suggested that the golden ratio exists in human anatomy and physiology — such as in our fingers, a fertile uterus, red blood cells and even a healthy blood pressure — and most of these claims have typically fallen short of actual science.

Before now, however, no one had suggested that the ratio existed in human skulls, said lead author Dr. Rafael Tamargo, professor of neurosurgery at the Johns Hopkins School of Medicine.

After years of operating on people's brains by first manually measuring their skulls with a tape measure, Tamargo began to realize that the skull's dimensions might follow the golden ratio. To come up with more precise numbers, Tamargo and his colleague Dr. Jonathan Pindrik, a neurosurgeon at Nationwide Children's Hospital and an assistant professor of neurological surgery at The Ohio State University College of Medicine, decided to analyze both human and other mammalian skulls.

They first analyzed CT scans of 100 patients who had presented to the hospital with various concerns, such as trauma. They found that two (imaginary) lines in the skull follow the golden ratio. One of the lines extends from the base of the nose near the eyebrows (called the nasion) to a point at the bottom of the back of the head (called the inion). The other imaginary line also extends from the nasion to a point at the top of the head that is where three bones of the skull meet (called the bregma).

But, of course, you can draw any line on the body and eventually come up with the golden ratio, so the key is to find "structures that have meaning in other contexts," he said. In this case, the line from the top of the nose to the back of the head (nasion to bregma) is a "very important line, because in almost all mammals, it encompasses the midline of the brain, and it gives you an idea of the complexity of the animal," he said.

But Lawrence Witmer, a professor of anatomy at Ohio University who wasn't involved in the study, disagrees. "There are any number of problems [with this study], not least of which is that their own data on humans do not support the golden ratio, since they didn't find 1.618 but rather 1.64," he told Live Science. The numbers are "close but not some magical convergence on a mathematical ideal."

"This whole thing seems to be an attempt to place humans apart from other animals," Witmer added.

Tamargo and his team also analyzed 70 skulls of six other mammals that they accessed in the collections of the Smithsonian Institution's National Museum of Natural History in Washington, D.C. They found that none of the other mammalian skulls followed the golden ratio. Rabbits were farthest from it, dogs and two species of monkeys were in the middle, and lions and tigers were closest to following it.

"It's a small sample, but there may be an indication that, as you increase the complexity of the animal of the organism, then the skull could approach the golden ratio," Tamargo said. Though monkeys are always thought to be more similar to humans than lions and tigers, the two monkey species they looked at — blue monkeys and rhesus monkeys — are far removed from us, he said. "I would be very interested in looking at the skulls of chimpanzees and bonobos, to see what their numbers are," since these primates are the closest to humans in terms of intellect, he added.

The presence of the golden ratio in biological systems might even optimize their structure or function, Tamargo said. But "what it means in the skull, I really don't know."

But this is not supported by the literature, said Dale Ritter, the lead human anatomy instructor for Alpert Medical School (AMS) at Brown University in Rhode Island, who was also not part of the study. "The presence of this ratio in disparate species and systems does not translate to it being an underpinning of optimized structure and function, or an indication of efficiency," he said.

What's more, the rank that the authors gave to the mammals in terms of a progression toward the golden ratio is "not an evolutionary progression," Ritter told Live Science. Both Ritter and Witmer agreed that the animals were arranged in a "biased" order of complexity following the golden ratio and could have been rearranged differently, yielding less-impressive results.

"I don’t get it…unless it’s again an attempt to separate humanity from the rest of the natural world as some ineluctable ideal," Witmer said.

"I believe the overarching problem with this paper is that there is very little (perhaps no) science in it," Ritter added. But "with so many bones and so many points of interest on those bones, I'd imagine there would be at least a few" golden ratios elsewhere in the human skeletal system.

The findings were published Sept. 1 in The Journal of Craniofacial Surgery.