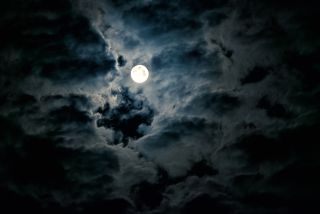 A full moon on Friday the 13th is spooky enough, but hold on to your black cats. September's full moon will also be a "micromoon."

Skywatchers in Central, Mountain and Pacific time zones will get a view of the full moon tonight (Sept. 13) at 11:32 p.m., 10:32 p.m. and 9:32 p.m., respectively, while East Coasters will see the moon at its fullest at 12:32 a.m. on the 14th. Regardless of time zone, the moon will appear just a bit dimmer than usual (eerie!), because it will be at apogee, or its farthest distance from Earth.

That means that the moon will appear about 14% smaller and 30% dimmer than when it is at its closest point to Earth, which is known as perigee.

The moon's orbit around Earth is elliptical. Each month, as this natural satellite orbits the planet, it passes through one apogee and one perigee. Moons at perigee are known as "supermoons." The closest perigee of 2019 occurred on Feb. 19, when the moon traveled within 221,681 miles (356,761 kilometers) of Earth.

Realistically, the difference between a supermoon and a micromoon is hard to spot. "[It's] not enough to notice unless you're a very careful moon-watcher," Sky & Telescope magazine senior editor Alan MacRobert said in a 2016 statement. Indeed, the term "supermoon" appeared in the lexicon only in 1979, according to that statement, and it wasn't until a spate of three supermoons in 2016 that the term became popular.

Though a dimmer-than-usual full moon could make Friday the 13th feel a little creepier, don't expect werewolves and mayhem. Full moons have occurred on Friday the 13ths before to no ill effect, and lots of research finds that humans are not affected by the moon's cycles. Contrary to popular myth, you're not more likely to go into labor, have seizures or go mad in the face of a full moon.

It's possible, though, that this month's superstitiously timed moon could act as a public relations boost for the micromoon. Perhaps, because bigger is better, micro- or minimoons haven't gotten the same attention as supermoons. Google minimoon, and you'll find more results about taking a local honeymoon than you will about any astronomical phenomenon (though Live Science's sister site Space.com has used the term). The term micromoon has been in play since at least 2016, as in this NASA side-by-side comparison of the moon at perigee and apogee. But while "supermoon" will net you more than 9.3 million Google results, micromoon clocks in at less than a million.

Will this month's freaky Friday the 13th full moon change that? Stay tuned. The next full micromoon isn't until Oct. 1, 2020.