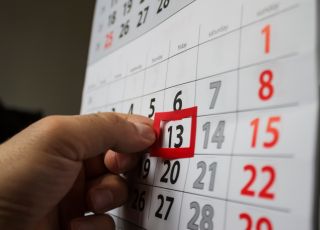 Many people believe Friday the 13th to be the unluckiest date on the calendar.
(Image: © Shutterstock)

Today is the second (and last) Friday the 13th of the year. Even though the date is known throughout Western culture as one tainted with evil and negativity, it's really just another Friday on the calendar. There is no difference between today and yesterday, or last Friday, regarding luck. Right?

It's 2019, and people are far less superstitious than were people who lived in the Middle Ages, when superstition was commonplace. Well, maybe not, said Kenneth Drinkwater, a parapsychologist at Manchester Metropolitan University in England. "We're actually really superstitious now, if not more so, and yet we think we're not," he said.

There is no scientific evidence to suggest this day has an increased chance of bad occurrences compared with other days. But that doesn't mean scientists haven't tried to find any.

In Thomas W. Lawson's 1907 novel, "Friday, the Thirteenth," a broker takes advantage of the superstition and creates a Wall Street panic on the evil day. The book was the likely inspiration for a number of scientific examinations of stock market returns on Fridays that fell on the 13th day of the month compared with all other Fridays. In 2001, Brian Lucey, a statistician and business professor at Trinity College Dublin in Ireland, published his analysis of a few of those studies and found several flaws. The studies had narrow assessments overall, focusing on just a few markets or a single stock exchange. But when he analyzed the data as a whole, Lucey found that internationally, with few exceptions, returns on Friday the 13th were typically just a little higher than returns on other Fridays.

The scientific evidence for cause and effect may not be there, but people may still alter their behavior on Friday the 13th in a way that causes certain things to happen that day, Drinkwater said. For example, he said, the way people might drive might be different from their usual. But the few studies that have retroactively examined traffic accidents haven't found statistically significant trends to suggest Friday the 13th is more dangerous than other Fridays on the road.

However, in 1994, Scanlon and colleagues reported that the risk of hospital admission as a result of a car accident is as much as 55 percent higher on Friday the 13th compared with other Fridays. "Staying at home is recommended," the researchers concluded. But it's important to note that the study was published in the Christmas issue of the BMJ, which is a tongue-in-cheek edition of the medical journal that normally publishes serious research.

The science is clear: Friday the 13th is a normal day. Yet, people continue to think this is destined to be a bad day. "It helps people to reduce anxiety," said Neil Dagnall, a parapsychologist at Manchester Metropolitan University. "Superstition generally serves as a mechanism to provide reassurance," he said.

Coming up with a reason why things went bad or might go bad in the future is a way for people to feel in control when they really aren't. "Psychologically, superstitions arise from the desire to influence external events, decrease anxiety and reduce uncertainty," Drinkwater explained.

Related: 13 Numbers That Rival the Number 13

When it comes to Friday the 13th, people are cautious because their culture has taught them to associate negative things with the date. That's why superstitions are confined to particular cultures and have many variations, the parapsychologists explained. For example, in Italy, the number 17 is far unluckier than 13, and in China, it's the number 4.

The history of Friday the 13th varies depending on whom you ask, but Dagnall said it doesn't matter why people think the day is unlucky. "What tends to happen with many of these [superstitions] is nobody's quite sure why they arise so there's all these different versions, but the superstition itself remains culturally ingrained," Dagnall said.

Besides, he said, "I don't think people know often why they do things."