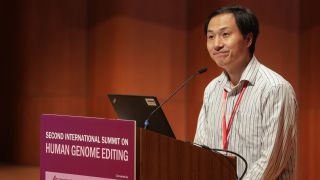 Chinese geneticist He Jiankui speaks during the Second International Summit on Human Genome Editing at the University of Hong Kong on Nov. 28, 2018.
(Image: © S.C. Leung/SOPA Images/LightRocket via Getty Images)

A month ago, there were countless commentaries on the one-year anniversary of the news that Chinese researcher He Jiankui had created the world's first genome-edited twins.

Read more: A year after the first CRISPR babies, stricter regulations are now in place

Now, commentaries are focused on the news that He has been sentenced to three years in prison and fined 3 million yuan ($560,000) for practicing medicine without a license, violating Chinese regulations on human-assisted reproductive technology and fabricating ethical review documents.

Zhang Renli and Qin Jinzhou, embryologists who participated in He's experiment, have also been given prison sentences and fines.

Some scientists believe that He's sentence should have been harsher. Others believe the penalties are sufficient and will be an effective deterrent.

Still other scientists bemoan the fact that scientists are being sent to jail. At the same time, they acknowledge that these are unusual circumstances. For example, Jennifer Doudna, one of the pioneers of CRISPR technology, told the Associated Press: "As a scientist, one does not like to see scientists going to jail, but this was an unusual case … [He's work was] clearly wrong in many ways."

From my perspective, these comments miss the mark insofar as they fail to acknowledge that the birth of three genome-edited babies is not just the work of three scientists. A three-year jail term and a 3 million yuan fine will not bring closure to this affair. It is important that He and his colleagues have been held accountable for their actions, but it is equally (if not more) important that we critically examine the institutional structures and cultural context that facilitated He's actions.

In December 2015, the organizing committee of the First International Summit on Gene Editing — of which I was a member — issued a statement stipulating that "it would be irresponsible to proceed with heritable human genome editing unless and until (i) the relevant safety and efficacy issues have been resolved … and (ii) there is broad societal consensus."

This statement was widely, and in my view appropriately, described by the media as a call for a moratorium on heritable human genome editing. Almost immediately thereafter, however, prominent scientists insisted that a moratorium was uncalled for.

This perspective was crystalized in the February 2017 report Human Genome Editing: Science, Ethics and Governance by the U.S. National Academy of Science and National Academy of Medicine. This report concluded that "clinical trials using heritable germline genome editing should be permitted," provided there was a compelling reason and there was strict oversight limiting use of the technology to specific criteria.

In November 2018, when He Jiankui was criticized for making CRISPR babies, he claimed to have satisfied the criteria set out in the 2017 report. While it is reasonable to dispute this claim, the fact remains that there was an authoritative document that He could point to as endorsing future use of heritable human genome editing.

Moreover, while the 2018 organizing committee of the Second International Summit on Human Genome Editing concluded that heritable genome editing "remains irresponsible at this time," it also called for a translational pathway forward — a roadmap — for moving from basic research in the lab to research involving humans. In this way, the committee both endorsed the future use of heritable genome editing and signalled that the pivotal ethical issue was how best to proceed.

In opposition to this view, in March 2019, prominent scientists and ethicists, including two of the three CRISPR pioneers (Feng Zhang and Emmanuel Charpentier) and several members of the organizing committee for the 2015 Summit, renewed the call to adopt a moratorium. A moratorium would allow for discussion on whether to proceed with germline editing while taking into consideration a wide range of "technical, scientific, medical, societal, ethical and moral issues."

Closure on the He saga requires more than an investigation, legal sanctions and better regulations. It requires us coming to terms with the fact that heritable human genome editing is "irresponsible at this time," not only because the science is premature, but also because widespread agreement on its merits is lacking. The absence of a widely agreed-upon, ethically sound reason to pursue this science very much matters.

[ Expertise in your inbox. Sign up for The Conversation's newsletter and get a digest of academic takes on today's news, every day. ]