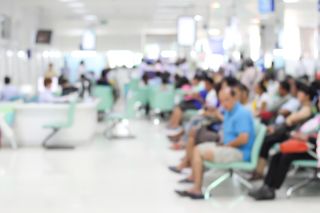 Her symptoms didn't feel like a "normal" cold or flu.

A couple of days ago, Caitlin Sweeney, a 34-year-old woman who lives in Brooklyn, New York, developed a dry cough, a sore throat, fatigue and slight nasal congestion. Sweeney, who is 22 weeks pregnant, worried that some of her symptoms, such as her dry cough, resembled those of COVID-19, the disease caused by the new coronavirus.

The number of COVID-19 cases in New York City is rising, so even though her symptoms were mild, she decided to seek medical advice. But when Sweeney called her primary care doctor, she became one of many people thrown into the confusion and frustration clouding COVID-19 testing across the country.

"The receptionist seemed to have no idea what to do about coronavirus and told Caitlin to go to urgent care instead," Sweeney's wife, Natalie Wolchover, told Live Science. (Wolchover used to be a writer at Live Science, and she is now a senior writer and editor for Quanta Magazine.)

So Sweeney called a nearby urgent care clinic. Staff members at the clinic told her they didn't have any way to do coronavirus tests and recommended she visit an emergency room instead. So Sweeney and Wolchover went to a nearby ER, where they were told that Sweeney's symptoms didn't meet the criteria for coronavirus testing. Namely, she didn't have liquid in her lungs, which could have indicated a more severe infection, and she didn't have a fever.

Sweeney's doctor said the Centers for Disease Control and Prevention (CDC) guidelines require a fever to do a test. (But not all patients with COVID-19 have a fever, even though that's one of the main symptoms associated with the disease). Moreover, only patients who have severe symptoms and have to be intubated — in which a tube is inserted into the body to help with breathing — are given coronavirus tests, the doctor said.

Instead, Sweeney was given a flu test, which was negative, and some cough drops and was sent home, Wolchover said. The doctor "was very apologetic about not being able to give Caitlin a test," she added. "She assured Caitlin that her lack of fever meant the baby wasn't in danger."

Dozens of similar anecdotes have been floating around Twitter and other social media platforms over the past couple of weeks. These people have found themselves in a similar situation: They had symptoms that they thought could be indicative of COVID-19, yet they were denied testing for it.

The reason is simple: There are not enough tests in the U.S. for everybody who may have COVID-19. But there has been a lot of mixed messaging from the government, media reports, social media and even employers on testing for the virus.

Currently, 78 state and local health labs in the United States have the capacity to test people for COVID-19, the CDC announced yesterday (March 10).

That means about 75,000 people can get tested — far fewer than the 1.5 million tests the Food and Drug Administration (FDA) pledged the U.S. would roll out by the end of last week. However, the numbers can be misleading; some labs are running two tests per person, according to The Atlantic.

States vary widely in their ability to test patients for COVID-19. California can test about 7,400 people a day, Washington can test 1,000 and Oregon can only test 40, an analysis by The Atlantic found. In total, the U.S. has tested a couple thousand people; by comparison, South Korea can test about 10,000 people every day.

The problem is that testing in the U.S. had a rough start. The first test developed by the CDC to diagnose COVID-19 turned out to deliver inconclusive results, which "left the nation with minimal diagnostic capacity during the first few weeks of the epidemic," according to a perspective article published March 9 in the journal JAMA.

Related: How does the coronavirus test work?

Initially, the CDC also limited testing to a very narrow group of people who had known exposure to COVID-19, meaning a person needed to have traveled to an affected area or been in contact with someone who had to be considered for testing. This strategy soon proved ineffective as evidence appeared that the virus had been spreading in U.S. communities. "In the early stages, COVID-19 has spread beyond the nation's ability to detect it," the authors wrote in the JAMA paper.

On Feb. 29, the FDA announced that it would allow labs across the country to begin testing for the novel coronavirus with their own lab-developed tests without prior approval, as long as the labs took basic steps to validate the tests and submitted an "emergency use authorization" (EUA) application within 15 days of the notice.

An EUA is a permission given by the FDA to use a drug or device that hasn't been FDA approved in times of declared emergencies. The New York State Laboratory has already received such an EUA to test for the new coronavirus, and other labs are expected to begin testing soon, according to the JAMA paper. "It is anticipated that testing will be far more available nationwide by mid-March," the authors wrote.

But more testing is not always better, said Dr. Joshua Sharfstein, lead author of the JAMA paper and a professor of health policy and management at the Johns Hopkins Bloomberg School of Public Health. For example, a person might go to the ER, wanting a test because they've been exposed to someone with COVID-19, but the test may turn up negative because the virus hasn't duplicated to detectable levels in their body yet. Or, a person thinking they might have the coronavirus but don't, might come in asking for a test and increase their risk of actually getting it by going to a hospital, he said.

In the setting of "high demand and low supply" of tests, decisions have to be made on how to best use those tests, Sharfstein told Live Science. "I think that we will have plenty of time to figure out what went wrong," he said. "The focus now has to be on managing the situation that we're in."

That means increasing testing capacity and supporting social distancing — a tactic to keep people from interacting closely or frequently — to reduce the spread of the virus. In the next couple of weeks, ideally, the U.S. would settle into a situation where medical professionals would be able to spot individual cases relatively quickly and stop these people from infecting others, Sharfstein said.

The confusion is palpable

Technically, Sweeney's doctor could have tested her if her symptoms warranted testing. The decision of whether to test someone for COVID-19 is now under doctors' discretion, according to recent announcements from the CDC and Vice President Mike Pence, who is leading the administration's response to the outbreak.

Related: Why are deaths in Italy so high from the coronavirus?

However, despite these guidelines for doctors, "tests aren't really available," said Dr. Eric Cioe-Peña, an emergency room physician and the director of global health at Northwell Health in New York. So, really, they're "transferring liability onto us without giving us the resources," he said.

With a shortage of test kits, most doctors would likely not use them for people with mild symptoms, he said. "We definitely had patients come in expecting tests; they've been told they could get a test" for COVID-19, Cioe-Peña added. "I think there have been lots of mixed messages" from the government, experts on TV, news reports, social media and employers, he added.

There are some employers, for example, that have been asking their employees to be tested for COVID-19 before coming to work "which again, creates fear and false expectations" Cioe-Peña said. Most of those healthy people won't be given a coronavirus test when they go and ask for it.

Rather, testing priority is for patients in intensive care units who have severe respiratory distress and require a lot of support, those who need to be admitted to the hospital for other reasons, those traveling from countries that have been affected heavily by the new coronavirus or those in contact with confirmed cases, Cioe-Peña said.

Still, Northwell Health, with its own lab-made tests, is one of the first private labs in New York to be able to do testing on their own. However, Northwell Health's labs serve 23 hospitals and 800 facilities and can run only 80 to 90 tests a day, he added.

Related: How to self-quarantine during the coronavirus outbreak

Technicians conduct those tests manually — something that also takes time, Cioe-Peña said. Northwell Health is currently working on developing a semiautomated or fully automated way to conduct the tests in the lab so that they can hasten the process, he added.

Eventually, as more tests become available, it will be important to test even mild cases so doctors and health officials can track the number of cases and figure out whether the numbers have started decreasing, he added. Currently, he said, officials know cases are increasing in New York City.

Testing wouldn't change treatment for people with mild symptoms, and these people should just recover from home for now, he said. If patients develop more-serious symptoms, such as breathing difficulties — or they are concerned about a risk factor, such as an underlying disease — they should call their doctor or local ER before going in, Cioe-Peña said.

But these guidelines have not been very clear to the general public. "I don't think it's fair to blame a person frustrated in urgent care," Cioe-Peña said. In communicating with the public, the government should have been much more specific about who can be tested for COVID-19, he added.

Hospital staff told Sweeney that if her symptoms became more severe, she shouldn't come back to the hospital but instead call her primary care doctor. But considering the doctor's office wasn't helpful over the phone, Wolchover said, they don't know what they'll do if Sweeney's symptoms worsen. Thankfully, Sweeney seems to be doing better, Wolchover said.

They are both self-quarantining themselves for now.