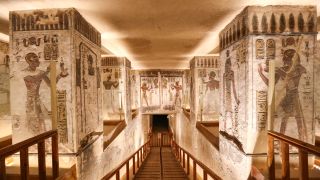 New discoveries in the Valley of the Kings, looted art from Venezuela and evidence that humans were in Central America more than 20,000 years ago are just some of the stories Live Science will be watching out for in 2020.

Tombs of pharaohs and queens in Valley of the Kings

Egypt's Valley of the Kings, which holds the tomb of King Tut and other Egyptian royalty, divulged several of its secrets in 2019, including a workshop complex, mummification cache, ostraca (pottery with writing on it) and newfound mummies. Excavations were carried out in both the east and west valleys of the Valley of the Kings and was funded in part by media companies that are paying for the right to film the excavations.

Excavations in the east and west valleys of the royal cemetery are ongoing; the artifacts found in 2019 are still being analyzed, and hieroglyphic writing on the ostraca is in the process of being deciphered. With all this work going on, it's likely that more discoveries will be made in the Valley of the Kings in 2020. Zahi Hawass, the former Egyptian antiquities minister who is leading work in the valley, believes that several tombs built for the pharaohs and their queens have yet to be found.

The melting of permafrost in the Arctic and sub-Arctic is causing the remains of both humans and animals to thaw and decompose, giving local inhabitants a smelly problem to deal with.

The re-emergence of smallpox and other now-extinct diseases from these corpses is generally regarded by scientists as being extremely unlikely, and the World Health Organization (WHO) says that corpses don't usually pose a major health problem. Even so, the emerging corpses bring with them some other issues. For instance, the corpses will inevitably smell and, if the dethawing corpses are underneath a building that humans still use, the corpses need to be dug up and re-interred to get rid of the smell. Additionally, if the corpses are near a water supply there is a risk of water becoming contaminated and causing illnesses such as gastroenteritis, according to the WHO.

Sweden is grappling with this problem on a growing scale. Centuries ago, there was a tradition in Sweden where people preferred to be buried under the floors of churches. However, as Earth's temperature warms, these bodies are starting to thaw and decay. This problem can be exacerbated when churches install modern-day heating equipment that can warm a church more effectively (making it easier for corpses to thaw).

The problems associated with the thawing of long-buried bodies will likely get more attention in 2020 in the Arctic and sub-Arctic.

In 2019, archaeologists discovered 30 sealed wooden coffins, their mummies still intact, in the ancient necropolis of El-Assasif near Luxor, Egypt. Dating back around 3,000 years, the haul of coffins has been called a "cachette of the priests" because some of the mummies are those of priests.

The decorations on the coffins are well preserved and none of the tombs had been robbed; grave looting in Egypt has been a common occurrence in both ancient and modern times, so to find 30 coffins and their mummies all untouched by grave robbers is extremely rare.

Archaeologists are continuing their excavations at El-Assasif. They are also analyzing the cachette in greater detail, translating the hieroglyphic inscriptions on the coffins and learning more about the mummies within. In 2020, they will likely dig up even more discoveries from this necropolis. Hopefully any new finds will also be untouched by looters.

While the world's attention has, understandably, being focused on the humanitarian crisis and political strife, there is evidence that Venezuela's rich historical treasures are being lost. Live Science has monitored large shipments of art leaving Venezuela. Documents from the U.S. Census Agency showed that in 2018 more than $12 million in art and antiques were shipped from Venezuela to the United States; and there are signs that some of this was stolen.

In September 2019, the Associated Press reported that the FBI was investigating stolen art from Venezuela that is being trafficked abroad. Venezuela's opposition, led by Guaidó, claims that members of Maduro's government are stealing the country's art and selling it for their own personal benefit. Whether these claims are true or not is unclear.

In 2020, we can expect to hear more about the loss of Venezuela's heritage.

Humans in Central America more than 20,000 years ago?

Live Science is aware of new research that suggests humans reached Central America more than 20,000 years ago. This would have occurred at a time when glaciers covered much of North America.

If this research is verified, it would be the oldest evidence for humans south of Alaska in the Americas. The new evidence the scientific team found includes a sizable number of stone tools as well as organic remains found in a cave. Various dating methods are being used to determine the age of the artifacts.

Previously, claims have been made of humans venturing south of Alaska before 20,000 years ago, though these claims have been found to be false or questionable. The scientists of the new study are aware of this and are taking the time to conduct additional fieldwork and analysis before publishing or widely disseminating their results.

If all goes well, this research will be published in a peer-reviewed journal sometime in 2020, and scientists not affiliated with the project will have a chance to evaluate its accuracy.