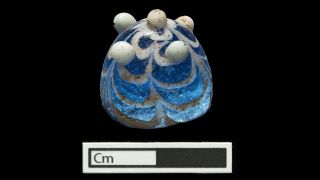 What looks like a tasty, blue gumdrop decorated with white frosting is actually a 1,200-year-old glass "king" piece that may have belonged to an elite gamer, according to Durham University, England, and DigVentures, a crowdsourced archaeological outfit, also in the U.K.

The royal-blue game piece was found in September 2019 during a community-based dig at a cemetery in Lindisfarne (also called Holy Island), a tiny island off the northeast coast of England. Lindisfarne was once home to monks who ran a medieval monastery that was infamously invaded by the Vikings in A.D. 793.

"This is a truly wonderful discovery, which gives us a very special insight into life in the monastery at the time," David Petts, a senior lecturer in the archaeology of Northern Britain at Durham University who co-directed the excavation with DigVentures, said in a statement released Thursday (Feb. 6). "It's similar to a number of other examples found at settlements and trading sites around the edge of the North Sea, and shows us not only that there were people on Lindisfarne who had leisure time, but that they were well connected."

Related: 16 of the most interesting ancient board and dice games

Five white bobbles decorate the newfound artifact and indicate that it was a king piece, said Maiya Pina-Dacier, the head of community at DigVentures. It's about 0.7 inches (2 centimeters) across, or "about the size of a chocolate sweet or Ferrero Rocher," Pina-Dacier told Live Science in an email.

The king piece would have been "a high-status object" that likely belonged to a royal who was living at or visiting the Lindisfarne monastery before the Vikings invaded, she added. "Other gaming pieces are usually made of wood or bone. We're hoping to get further analysis done to tell us more about how it was made and maybe even where the materials came from."

The board game itself was a strategy-laden lark with Roman roots called "ludus latrunculorum". As the Romans invaded new lands, ludus latrunculorum spread; the game evolved differently in each location but became known by the umbrella term "tafl." Tafl games were played in Britain, Ireland, Iceland, Denmark and Sweden before chess arrived in the 11th and 12th centuries, Pina-Dacier said.

"Although each region had their own version of the rules, the basic principles were the same: Defend a central king against attackers," she explained. "There was usually only one decorated piece — the king; the rest would be more like counters."

This is the second tafl game piece discovered in the British Isles. The other one was found at a Pictish hillfort in Dundurn, Scotland.

DigVentures plans to return to Lindisfarne in September 2020 to continue the dig. If you'd like to join, visit digventures.com/projects to learn more.