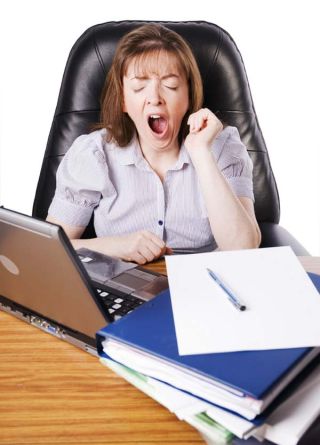 Staying in bed on the weekend might not be enough to make up for a weeks' worth of sleep deprivation, a new study suggests.

In the study, after five days with only four hours of sleep, a 10-hour doze did remedy some of the ill effects of chronic sleep restriction. However, even after an extended snooze, participants still experienced lapses of attention and delayed reaction times.

The findings agree with those of a previous smaller study showing that people can accumulate a sort of  sleep debt by going long periods with little sleep even if they also sleep in every once in a while.

The current study suggests complete recovery from sustained sleep restriction may require even more sleep during one night or multiple nights of extended sleep, the researchers say.

"The sleep restriction was severe enough that recovery of alertness was not complete following a single night of extended sleep," said study researcher David Dinges, of the University of Pennsylvania School of Medicine. "Lifestyles that involve chronic sleep restriction during the workweek and during days off work may result in continuing buildup of sleep pressure and in an increased likelihood of loss of alertness and increased errors."

The study involved 159 healthy adults with an average age of 30, which is the largest number of subjects to be involved in a single laboratory-based experiment on sleep restriction.

The participants were only allowed to sleep from 4 a.m. to 8 a.m. for five consecutive nights. Then they were randomly assigned to one of six doses of recovery sleep ranging from zero to 10 hours in bed for one night. Seventeen of the participants made up a control group that spent 10 hours in bed on all nights.

Participants' average sleep time dropped from 8.47 hours initially to 3.72 hours on the first night of sleep restriction. Relative to the control group, sleep restriction degraded all neurobehavioral functions across the five days of sleep loss. One night of recovery sleep then improved all neurobehavioral outcomes as sleep times increased. However, lapses of attention, sleepiness (as reported by subjects), reaction times and fatigue scores all remained elevated above initial levels in the 27 participants who spent 10 hours in bed on the recovery night.

The authors note an individual might not be able to get all the sleep he or she needs to recover in one night because of the way our bodies are wired to be awake during daylight hours, a phenomenon known as circadian rhythm.

Dinges also noted that performance and alertness deteriorated profoundly when the five nights of restricted sleep were followed by a night of either no sleep or only two hours of snooze time.

The results are published in the Aug. 1 issue of the journal Sleep.