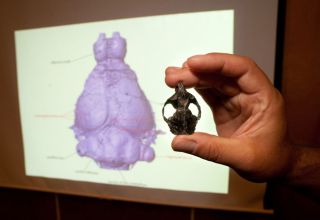 University of Florida vertebrate paleontologist Jonathan Bloch holds this 1.5-inch-long Ignacius graybullianus skull up to an image of its brain. In many ways, the early primate behaved like living primates but with a brain that was one-half to two-thirds the size of the smallest modern primates.
(Image: © Eric Zamora, University of Florida)

Using a 54 million-year-old skull, researchers have constructed the first-ever virtual model of a primitive primate brain.

"This is our first glimpse of what an ancestral primate would have looked like in terms of its brain," said Jonathan Bloch, a vertebrate paleontologist at the Florida Museum of Natural History who was part of the modeling team. "And that tells us quite a bit about its behavior and the evolution of things like certain aspects of intelligence."

To develop their model, the scientists took 1,200 ultra high resolution X-rays of a well- preserved 1.5-inch-long skull from a mammal belonging to the ancient primate group Plesiadapiforms. The two dimensional X-rays were then stacked up and "stitched" together to form a 3-D model, Bloch said. While this imaging technique has been used to examine primate brains from more recent fossils, no one has used it to study so-called "stem primates," mammals that existed 65 million to 55 million years ago and gave rise to today's primates, until now. The skull used for this model is a "late-occurring" stem primate, a member of a group that survived from the Paleocene (65 million to 55 million years ago) into the early Eocene (55 million to 33 million years ago), Bloch said, adding: "But likely [it] is very similar to what stem-primates would have looked like during the Paleocene."

Traditionally, scientists have used fossils called "endocasts" to study ancient primate brains. These casts form when rock sediments fill the skull's brain cavity. If the skull breaks away, what's left is a mold that provides a good picture of what the surface of the brain looked like. The problem is that endocasts are rare for stem primates. But the imaging technology used in this study has given scientists a new look at these old brains.

For example, the technology yielded a very precise measure of the animal's brain size.

"We could very accurately figure out brain volume from this endocast; there was a tiny bit of distortion, but very little," Bloch told LiveScience. "In the past, there have only been fragments of endocasts, so they would have to guess essentially how large the brain was."

What Bloch and his colleagues saw was that, contrary to some proposed ideas about early primate brains, the brain was not exceptionally small. "Actually, for animals of that time, it's really sort of a normal-sized brain," Bloch said. However, compared to today's primates, it is a small brain, he added.

Using the model, the researchers were also able to make some inferences about primate brain evolution. One unique feature of primates today is their large brains, and people have wondered when and how primate brains got so big. One idea is that primates "may have evolved large brains in coordination with increasing specializations for living in trees and eating fruits and leaves and these kinds of things," Bloch said.

Previous research by Bloch and his colleagues has shown that early primates were very well-adapted for living in trees and eating fruits and leaves, but the current research indicates that these primates had very small brains.

"So at the beginning, they were doing many of the same things that living [modern] primates do in terms of their behavior, but they did it with smaller brains," Bloch said. "So it's not likely that large brains evolved in coordination with a lifestyle that included living in trees and eating fruits and flowers and leaves, but in fact probably large brains evolved a bit later in primate evolution, corresponding with things like increasing visual specialization."

From their model, the researchers saw that the early primate had very large olfactory lobes, meaning that "it is a very smell-oriented animal," said Bloch. In contrast, it had small temporal lobes indicating it was not sight-oriented, he adds. "So we can see, with the first stages of primate evolution, primates had relatively small brains and were specialized for smelling rather than focused on visualizing."

The study was led by anthropologist Mary Silcox from the University of Winnipeg in Canada. The results from the study were published online in the June 22 issue of the journal Proceedings of the National Academy of Sciences. The research was funded by the National Science Foundation and the National Sciences and Engineering Research Council.