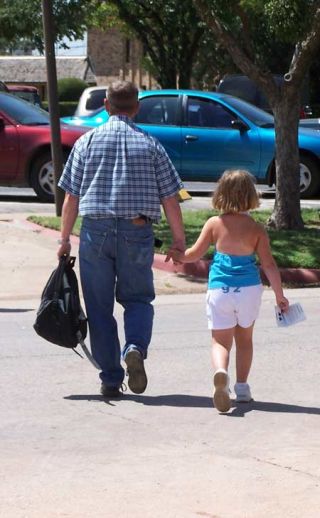 One of the tenets of evolutionary biology is that a man's contribution to fatherhood is one tiny little sperm, a miniscule nosecone of genes riding atop a flagellating tail. In contrast, women carry the much heavier burden of making babies — they produce comparatively giant gametes, develop and carry fetuses, and then nurse and care for kids. But it looks like biology has underestimated the role of fathers. A recent discovery by scientists at the Huntsman Cancer Institute at the University of Utah has shown that male genes affect the proper development of a fetus during pregnancy. Apparently, a dad's biological role during pregnancy doesn't end after sex. But then many people in other cultures already knew that. Across South America, various indigenous cultures believe that babies can have multiple biological fathers. If a women has affairs during pregnancy — and many of them do — all the men are named as fathers of the baby. The woman's husband gains prominence as the primary father, but everyone knows that her lovers also figure in the development of the fetus as secondary fathers. More interesting, these groups feel that repeated inseminations are good for fetuses, that they help the baby grow strong and healthy. As it turns out, many dads are a good thing for babies, but it's not about pregnancy per se. Anthropologist Stephen Beckerman and colleagues at Penn State University have looked at the effect of having more than one "biological" father in the Bari of Venezuela. They found that Bari children with more than one father are much more likely to survive to age 15, and their survival, the researchers suggest, is because the secondary fathers often gave "their" kids extra fish and meat during childhood. What is striking about all this research is that it's news when scientists discover that men have a bigger role in making and raising children than we thought. As a culture, we are anti-father. We focus on absent fathers, deadbeat dads, and men who spend more time at work than time with their kids. Women in our culture these days seem to parent all on their own. According to the U.S. Census, there were 10 million single mothers bringing up kids alone in 2005, and that number was up from 3 million in 1970. Single mothers also often have to strong-arm fathers, often incurring high court costs, to get men to pay child support. On Staten Island, New York, for example, 60 percent of non-custodial parents fail to pay court ordered child support. Presumably some of these delinquent parents are women, but probably most are men. And many mothers have to rely on the state to go after these men and wring some money out of them. We have become a culture that expects little or nothing of our fathers. With a high divorce rate, fathers are also often absent from the home, checked out from the daily life of their children. And what a loss. We are a species that has evolved the idea of a family with at least one dad. Sure, his sperm is needed to make a child, and now we know, like the Bari, that a father's contribution during fetal development does more than determine the sex of the baby and the color of her eyes. The Bari have also shown that kids grow best after birth with consistent infusions of fish and meat and attention from their dads. If only the men in our culture could do the same.