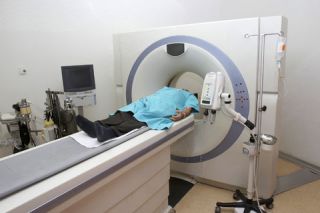 CT scanners take a series of X-ray images from different angles to create a 3-D image of the inside of a part of the body.
(Image: © Dreamstime)

"Huge Increase," "Overexposed," and "Higher Than Ever" are some of the terms in headlines yesterday reporting that the average American’s exposure to radiation from medical procedures has risen over the last 30 years.

The reports are true, though the hype may be unwarranted. The bulk of the increase is among certain individuals undergoing valuable and sometimes life-saving medical procedures or tests.

Yes, Americans are now exposed to about six times more radiation from medical procedures than they were in 1980, according to a report released today by the National Council on Radiation Protection and Measurements. However, the numbers can be misleading, some scientists say.

"Adding up all the doses and then spreading out the total over the entire population, no matter a person’s age, occupation, location, or health status is not appropriate for assessing risk to the general population ," said Cynthia McCollough, a professor of radiological physics at the Mayo Clinic in Rochester, Minn.

The increase in radiation is largely due to a rise in the number of CT, or computed tomography, scans being performed in the country. While in 1980 these scans were just beginning to be widely used, by now they have taken hold as a major diagnostic tool with many applications.

And though the total number of CT scans carried out has increased over the past few decades, the average amount of radiation per scan has dramatically decreased as the technology has become more sensitive and advanced. Also, the American population now is older on average than it was in 1980, and older people tend to have greater medical needs and seek more medical care than younger individuals, which also adds to the increase in scans.

In most cases, a CT scan is used only on patients at risk for serious, life-threatening medical conditions. For these people, the risk of dying from an undiagnosed or misunderstood problem dwarfs the risk of later on developing cancer as a result of the scan. And the CT scan is often replacing an even riskier evaluation option, such as an exploratory surgery or other invasive procedure.

"It’s true that the number of CT scans rose, but there’s a tremendous benefit — they either confirm or rule out medical problems," Richard Morin of the Mayo Clinic Florida told LiveScience. "For one patient, there is a tangible benefit as long as the exam is ordered correctly, and the downside risk of cancer is extremely small."

CT scanners take a series of X-ray images from different angles to create a 3-D image of the inside of a part of the body. They can reveal tumors, internal bleeding, pulmonary embolisms, and a host of other life-threatening conditions. Tens of millions of the procedures are performed each year in the United States. On average, the radiation exposure from a CT scan is equivalent to about 600 chest X-rays.

"600 of anything sounds like a lot," McCullough told LiveScience. "What’s missing is that the chest X-ray is the lowest dose X-ray there is, and the type of information you get from a chest X-ray compared to a chest CT, is really like comparing apples to grapes in terms of their value."

The radiation from a CT scan is called ionizing radiation. It is high in energy, and as it travels through the body, it could knock out electrons from atoms, ionizing them and breaking their chemical bonds. If atoms in DNA are ionized, and the damage is not repaired, a section of DNA that codes for an important function, such as stopping certain cells from reproducing, might not work. If these cells continue to reproduce without stopping, they may develop into a cancerous tumor.

"All of those are possibilities," Morin said. "We don’t know for sure. Also this happens in regular nature all the time. There’s no difference between cancer caused by radiation or cancer caused by some other carcinogen in the environment."