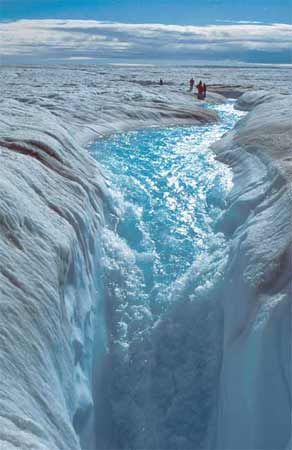 As ice in Greenland melts at the surface, water carves fissures and reaches the base, where ice meets land. This sub-glacial ice can lubricate a glacier, causing it to flow to the ocean faster and be depleted more quickly than would otherwise occur.
(Image: © NASA)

SAN FRANCISCO—Veiled by more than a mile of ice, an expanse of heavily scoured mountains and valleys in Greenland has remained out of sight until now.

Using a new radar technique, scientists have constructed crude but useful 3-D images of the hidden land. Images like these could lead to better predictions of how the Greenland ice sheet will change in the future, the scientists said here this week at the annual fall meeting of the American Geophysical Union.

The topography as well as deposits of water beneath the ice will impact how the ice sheet moves and changes over time. So detailed images of it all will allow scientists to predict how the ice sheet will respond to global warming, said lead researcher Ken Jezek of Ohio State University.

"Our dream is to create this new image of what Greenland would look like, were the ice sheets stripped away," Jezek said.

As scientists try to gauge the effects of global climate change, they are beginning to look closely at conditions beneath Earth's ice sheets, which cover roughly 15 percent of the planet. That's because, just as the surface ice has morphed over its 2.7 million-year life, the world beneath the ice has likely evolved.

Like other continental-size slabs of ice, the Greenland ice sheet gets squished down under its own weight, and as with a tube of toothpaste, the force squeezes ice outward so there's movement at the sides. How speedy the ice motion is depends on other factors, such as whether the bottom of the ice, where it meets the ground, is well lubricated by water.

Scientists have known that warming temperatures have caused the ice surface to melt, sending the melt-water percolating down through cracks in the ice [image]. But what happens where the ice meets the hidden land beneath has remained a mystery.

"You can imagine that if suddenly a large amount of water, spatially distributed, appears, that instead of being welded to the bed and moving slowly, it just starts to scoot along," Jezek told LiveScience. "And that's probably what's happening."

In the past, scientists who wanted to study Greenland's ground profile beamed radar from an aircraft, restricting their data collecting to directly beneath the airplane. The resulting images were two-dimensional in that they gave the height of a particular spot of land directly along the thin line of the flight path.

Scientists led by Jezek used the Global Ice Sheet Mapping Orbiter (GISMO), which looks both directly downward and to the sides to map a strip of the ground about a mile wide lying about 1.2 miles beneath the Greenland ice. The instrument was developed by Ernesto Rodriguez of the Jet Propulsion Laboratory (JPL).

They found topography matching that of Canada and the northern United States, with much of the land scoured by flowing ice and huge mountains rising up from the bottom. The under-ice rivers could speed the ice flow above. Plus, steep terrain down which water can slide also could accelerate ice speed.

The team will fly again in April with the hope of mapping much wider swaths of land up to seven miles wide.

The instrument also has celestial potential. Part of NASA's Instrument Incubator Program, GISMO could be flown in space.

"We would fly a radar and image the ice sheets from outside the atmosphere and that would allow us to look at changes over ten-year time scales," said Tony Freeman of JPL, whose job is to figure out how to get GISMO into space.

"It's also the same technology that we would use to map the bottom of the ice sheet on Mars," Freeman said.

And in future missions to Jupiter's moon Europa, the instrument could map an ocean thought to reside beneath the moon's icy surface.