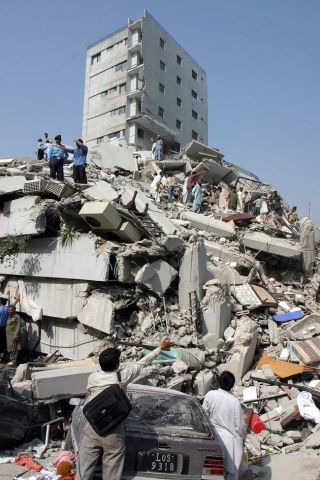 It's not your imagination: Natural disasters are becoming more common. But don't blame Mother Nature; we humans are moving in droves to disaster-prone coastlines and living in substandard structures. The magnitude 7.6-earthquake that struck Pakistan and killed upwards of 80,000 people was just another example of our inability to deal with events that are statistically normal. Christian televangelist Pat Robertson didn't let science cloud his vision, however, when he said the quake and a busy hurricane season might be signs that the Biblical apocalypse is near.

The recent spate of natural disasters affecting the globe "might be" signs that the Biblical apocalypse is near, says Christian televangelist Pat Robertson.

On an Oct. 9 episode of CNN's "Late Edition," the preacher noted that hurricanes such as Katrina and Rita and earthquakes like the ones that struck Pakistan this past weekend and the tsunami-causing one that struck Indonesia last December are hitting with "amazing regularity."

Scientists see Earth doing what she always does, however.

"If you read back in the Bible, [Paul] said that in the latter days before the [apocalypse] that the Earth would be caught up in what he called the birth pangs of a new order," Robertson said. "Well, what was called the blessed hope of the Bible is that one day Jesus Christ would come back again, start a whole new era, that this world order that we know it would change into something that would be wonderful that we'd call the millennium."

But before there can be heaven on Earth, there will be some "difficult days" which will be like "what a woman goes through in labor just before she brings forth a child," Robertson said.

Seth Stein, a seismologists at Northwestern University's Weinberg College of Arts and Sciences, thinks everything is as it should be, at least as far as earthquakes go.

"I don't think there's any reason to believe the frequency of large earthquakes has changed over the past million years," Stein told LiveScience. "That's contrary to everything we know about how the Earth works."

On average, there is at least one magnitude 8 earthquake every year and about 17 magnitude 7's, according to the U.S. Geological Survey. The Pakistan quake measured 7.6.

Of course, some places on Earth are more prone to earthquakes than others.

Alaska is one of the most seismically active regions in the world – experiencing a major earthquake (magnitude 7.0 or greater) almost every year, whereas no earthquakes of more than moderate intensity have occurred within the borders of North Dakota during historical times.

Concerning hurricanes, Robertson may be correct in observing that they're occurring more frequently than in the past.

According to the National Center for Atmospheric Research (NCAR), the period between 1970 to 1994 saw on average about 9 tropical storms in the Atlantic basin, with about 7 of those turning into hurricanes. From 1995 to 2004, that number jumped to 14 tropical storms and12 hurricanes.

2005 is likely to surpass them all, said Kevin Trenberth, the head of climate analysis at NCAR.

"By several measures, this will end up being the most active storm season on record, it's not just number but also how intense they are," Trenberth said.

But scientists aren't willing to blame the apocalypse just yet. A decades-long cycle of busy and the quiet periods is evident in records dating back to the mid-1800s. This is not the first stretch of highly active hurricane seasons. It is just the first time so many people have lived near the coast during such an active period.

Trenberth cites a number of factors responsible for the trend toward stronger and more frequent hurricanes being observed. These include natural variability in hurricane frequency and intensity, global warming, and El Niño, a warming of the waters in the off the eastern coast of South America that occurs naturally every 4-12 years.

"Following an El Niño there tends to be warmer sea temperatures," Trenberth said. "It changes the atmospheric circulation to create extra warming of the Atlantic [Ocean]."

As the surface of the Atlantic Ocean warms, more water evaporates into the atmosphere, which allows for stronger tropical storms. Global warming is believed to contribute to hurricanes in the same way, by warming up the ocean surface and putting more moisture into the atmosphere.

About Robertson's comments, Trenberth said that he "thinks its part of the general [socio-political] climate that seems to exists in the country today, fostered partly perhaps by this administration and their lack of credence to science."