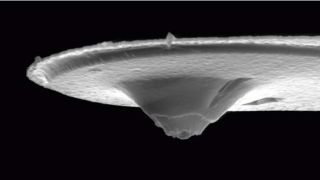 Researchers have created the world's smallest fountain pen with a tip so tiny it can draw lines a hundred times thinner than a red blood cell.

Called the "nanonfountain probe," it can paint lines as thin as 40 nanometers and has its own reservoir to hold various types of inks, including pigments for painting patterns and organic materials for designing sensors.

Existing nano-pens use the same type of inks, but cannot hold an ink supply and must be dipped into the ink.

The new pen can be attached to the atomic-force microscope, which allows scientists to see nanoscale environments as well as draw on them. Possible uses for such a tiny pen, or an array of several of them, include crafting miniscule protein arrays and complex semiconductors.

Because scientists built the pen using standard microfabrication techniques and materials, it will be possible to mass-produce the tips.

The pen was developed by researchers at the National Science Foundation Nanoscale Science and Engineering Center for Integrated Nanopatterning and Detection Technologies. The research was published earlier this year in the journal Small and was publicly announced this week.