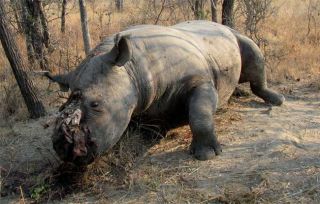 In 2010, the illegal slaughter of rhinos in South Africa reached unprecedented heights, averaging almost one rhino killed every day, according to the WWF, an international conservation group. That's nearly triple the number killed in 2009.

National park officials say that a record 333 rhinos were killed last year, including 10 critically endangered black rhinos. According to the International Union for Conservation of Nature (IUCN), only about 4,200 black rhinos are still alive on the planet. White rhinos are classified as near-threatened.

Rhino poaching across Africa has risen sharply in the past few years, threatening to reverse hard-won population increases achieved in the 20th century.

"The recovery of African white rhinos from less than 100 in the late 19th century to more than 20,000 today is a phenomenal conservation success story that can largely be attributed to the combined efforts of South Africa’s state and private conservation authorities," said Morné du Plessis, CEO of WWF South Africa.

The current wave of poaching is being committed by sophisticated criminal networks using helicopters, night-vision equipment, tranquilizers and silencers to kill rhinos at night to avoid law enforcement patrols.

The recent increase in killings is largely due to heightened demand for rhino horn, which has long been prized as an ingredient in traditional Asian medicine. Some believe the horns can cure cancer, a claim with no medical basis.

Although the sale of rhino horn is illegal in most countries, WWF officials are urging officials across Asia to step up enforcement.

Five rhinos have already been killed by poachers this year.