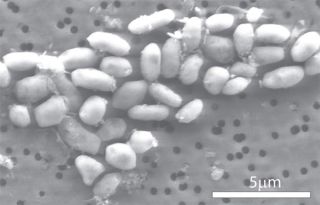 The discovery of a microbe that thrives on arsenic won't force scientists to rewrite entire biology textbooks, but some paragraphs will definitely need to be revised, experts say.

In a much-anticipated press conference yesterday (Dec. 2), researchers announced that the bacterium GFAJ-1, found in a briny California lake, doesn't just tolerate arsenic — it can incorporate the poisonous stuff into its DNA and other vital molecules in place of the usual phosphorus.

This surprising flexibility should give biologists a greater appreciation of just what life on our planet is capable of, scientists said.

"Findings like this do change our perspective of life on Earth," said Jack Gilbert, a biologist at Argonne National Laboratory and the University of Chicago who was not involved in the new research. "They show us how adaptable it is."

They also make more feasible the possibility of finding a whole shadow biosphere where life based on alternative chemicals thrives, scientists say.

Life will find a way

Life on Earth, especially microbial life, is incredibly flexible. Bacteria exploit pretty much every conceivable environment on the planet — hot or cold, oxygen-rich or oxygen-free — and they subsist on a mind-boggling array of resources. [Extremophiles: World's Weirdest Life]

But the new find, published online yesterday in the journal Science, raises this already high bar. Scientists had regarded phosphorus as one of six key ingredients — along with carbon, hydrogen, nitrogen, oxygen and sulfur — that all life on Earth needs to survive.

So finding a microbe that can dispense with phosphorus is like coming face to face with the fictional Horta beast from the science-fiction TV show "Star Trek," NASA scientist Mary Voytek said during yesterday's press conference. The Horta was based on silicon rather than carbon.

"Here we find life with an adaptation that until very recently was dismissed as implausible," said study coauthor Ariel Anbar of Arizona State University. "That's a big deal."

And GFAJ-1 may just be the tip of the iceberg, Anbar said. Study lead author Felisa Wolfe-Simon, currently a NASA astrobiology research fellow at the U.S. Geological Survey in Menlo Park, Calif., started looking hard for an arsenic-loving life-form less than two years ago.

"If one study, the first time out, can find something like this, maybe this kind of thing is more prevalent than we'd thought," Anbar told LiveScience.

To find out how common capabilities such as GFAJ-1's are, researchers should investigate other arsenic-rich environments, Anbar said. And they should determine if microbes are swapping out phosphorus for arsenic in the field as well as the lab (the study reported in Science was lab-based). [How Does Arsenic Kill?]

Other, less extreme environments should be checked out, too, according to Anbar. It's not inconceivable that microbes like GFAJ-1 could be swimming through the soil in gardens and backyards around the world.

The new finding may also inspire researchers to look for microbes that can substitute for one of the other five core elements of life. None of these are as likely as the arsenic-phosphorus switch, Anbar said, but they may be worth a look.

Sulfur in particular may be a good candidate, according to study coauthor Ronald Oremland of the USGS in Menlo Park.

"There might be a chance of selenium substituting for sulfur," Oremland told LiveScience.

It's even possible that some life-form has found a way to replace nitrogen or — like the fictional Horta — swap out carbon for silicon.

"I still wouldn't bet on it, but it's more likely now," Anbar said.

GFAJ-1 can utilize phosphorus as well as arsenic. In fact, it grows faster when given phosphorus. So it's probably just extremely adaptable, not a life-form so fundamentally different as to belong to an entirely separate tree of life, researchers said.

But GFAJ-1's amazing abilities hint at an undiscovered diversity that may be out there under biologists' noses, researchers said. The find makes the prospect of a so-called "shadow biosphere" — a radiation of organisms on Earth with a different origin and evolutionary history than "normal" life — more plausible.

The confirmation of a shadow biosphere would be one of the biggest scientific discoveries of all time. It would suggest that life as we know it is not terribly special, that it can take root fairly easily. If life originated more than once on Earth, after all, the chances that it took root elsewhere in the universe would shoot up.

The new study could inspire scientists to search harder for a shadow biosphere, or at least give them more hope that one might exist.

"We haven't discovered a hidden biosphere," Oremland said. "But the possibility that one exists is a little greater now."

Mike Wall is a Senior Writer at SPACE.com, a sister site of LiveScience.