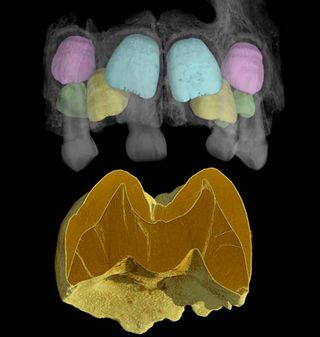 Kids may wish for shorter zit-filled childhoods and adolescence. But taking longer to mature may have given humans an evolutionary edge over Neanderthals by giving their brains and social skills more time to develop. Now dental records of early human fossils show how that developmental delay crept in over time.

The average Neanderthal may have reached adulthood a few years before most modern humans, according to Tanya Smith, an evolutionary biologist at Harvard University. She and her colleagues used synchrotron X-rays imaging to create a 3-D image of the teeth from 11 Neanderthals and early human fossils. (A synchrotron is a beam of X-rays as thin as a human hair and very intense such that it can reveal teensy details.)

"Teeth show biological rhythms – intrinsic or internal clocks that capture each day of their growth, as well as stress during development," Smith said. "Being born is stressful enough that this leaves a characteristic stress line we can identify – a birth certificate."

But she cautioned that the closely related human and Neanderthal populations make it difficult to pin down a precise difference in the actual ages of maturity. Other research has shown that modern humans still have Neanderthal genes from back when the two populations mated.

A prehistoric race in reverse

The Neanderthal tooth crowns grew significantly faster than modern human teeth. By contrast, the teeth of the juvenile Homo sapiens of the Middle Paleolithic era (200,000 to 45,000 years ago) matured at a rate that had greater resemblance to that of modern humans. (Neanderthals lived as far back as 230,000 years ago, disappearing from the fossil record a few thousand years after modern humans came onto the science, scientists have suggested.)

Slow and steady does it

Still, it's the modern human slowpokes that may reap the greatest benefits of having more time before adulthood for their brains to learn complex social behaviors, Smith said. The current theories about development and cognition suggest that learning and neural organization continue well after final brain size is reached.

"The classic theory is that slowing down childhood may create favorable conditions for allowing this to happen more effectively in modern humans," Smith told LiveScience. "We don't have to deal with the pressures of obtaining social status or bearing offspring as early teenage chimpanzees do, for example."

The typical method for analyzing tooth lines representing stresses at certain ages would have required cutting up dozens of fossil teeth – something museum curators "would never allow," Smith said.

Instead, she and her colleagues at the Max Planck Institute for Evolutionary Biology in Germany and the European Synchrotron Radiation Facility used synchrotron X-ray imaging to create a 3-D view of the inner structures of the teeth.

"The synchrotron was critical for two main reasons – it is a 'virtual way' to see microscopic structure in 3-D – thus a really powerful way to visualize growth, and it is non-destructive – allowing us to look at some of the most famous Neanderthal and fossil Homo sapiens children in this study," Smith pointed out.

The study's specimens included the first hominin fossil, discovered in Belgium in the winter of 1829 to 1830. X-ray imaging revealed that the Neanderthal child was just 3 years old at the time of death, as opposed to previous estimates of 4 or 5 years old.

Now researchers will add this to the body of evidence as they try to understand the shift from a "live fast and die young" strategy to a "live slow and grow old" strategy.