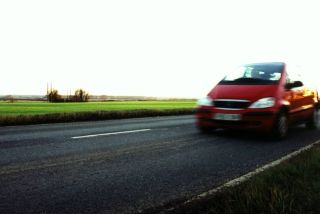 Showing off an automotive ingenuity one would expect from the country that produced Mercedes Benz and the autobahn, the German state-science outfit Fraunhofer-Gesellschaft has developed an eye tracking unit that will wake sleeping drivers. Eyetracker alerts motorists right before they nod off, avoiding accidents and improving on the American system of truck stop coffee and Metallica blasted at full volume.

If the camera modules detect that the eye is closed for longer than a user-defined interval, it sounds an alarm. When used as a driver-assistance system, there can be four or even six cameras keeping watch over the driver’s eyes.

The cameras evaluate up to 200 images per second to identify the line of vision, even when a driver’s head moves to the left or right. Yet the Eyetracker is only roughly half the size of a matchbox and practically undetected when mounted behind the sun visor and in the dashboard. The tiny lenses are just three to four millimeters in diameter.

The special feature of the Eyetracker is that it can be installed in any model of car. There is no need for a complicated calibration of the cameras. The system also doesn't need a PC or laptop, and can run off of its own proprietary hardware.