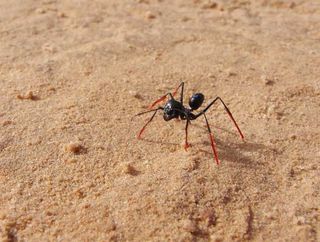 An ant with red dyed stilts overshoots its goal because its increased stride length interferes with its internal pedometer.
(Image: © Â© Science])

Ants use an internal pedometer to find their way home without getting sidetracked, a new study reports.

Desert ants on foraging expeditions use celestial cues to orient themselves in the homeward direction, but with few landmarks in the barren land, scientists have wondered how the insects always take the most direct route and know exactly how far to march.

The new study reveals that counting their steps is a crucial part of the scheme.

Over the years, scientists have proposed several theories for how ants find their way home.

One is that they do it like honeybees and remember visual cues, but experiments revealed ants can navigate in the dark and even blindfolded. Another disproved hypothesis was that because ants scurry at a steady pace, they could time how long it took them to get to and fro. Other studies have shown that once ants find a good source of food, they teach other ants how to find it.

The ant "pedometer" technique was first proposed in 1904, but it remained untested until now.

Scientists trained desert ants, Cataglyphis fortis, to walk along a straight path from their nest entrance to a feeder 30 feet away. If the nest or feeder was moved, the ants would break from their straight path after reaching the anticipated spot and search for their goal.

Try that on stilts

Next, the researchers performed a little cosmetic surgery.

They glued stilt-like extensions to the legs of some ants to lengthen stride. The researchers shortened other ants' stride length by cutting off the critters' feet and lower legs, reducing their legs to stumps.

By manipulating the ants' stride lengths, the researchers could determine whether the insects were using an odometer-like mechanism to measure the distance, or counting off steps with an internal pedometer.

The ants on stilts took the right number of steps, but because of their increased stride length, marched past their goal. Stump-legged ants, meanwhile, fell short of the goal.

After getting used to their new legs, the ants were able to adjust their pedometer and zero in on home more precisely, suggesting that stride length serves as an ant pedometer.

The study is detailed in the June 30 issue of the journal Science.