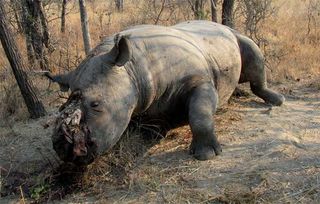 The poaching of rhinos for their horns has risen dramatically over the last year and a half, conservationists report.

These crimes are fueled by demand for African rhino horn from the Asian market, where it  can fetch more than $30,000 a pound ($60,000 per kilogram).

Africa is losing a rhinoceros every other day. South Africa, which holds more than 80 percent of the continent's rhino population, has been losing at least 20 rhinos per month.

"Within South Africa's national parks — not counting private land there, where poaching was rare — there were 10 rhinos poached in 2007," said Matthew Lewis, senior program officer for African species conservation for the World Wildlife Fund. "Thus far in 2010 alone, more than 200 rhinos were poached within South Africa, with a lot of those poached outside national parks, so that's a more than 2,000 percent increase in just three years' time."

The horns might weigh 6.3 to 8.1 pounds (2.9 to 3.7 kilograms) on average. Bits of crushed horn are a prized ingredient in traditional Asian medicines.

The crisis in Africa

Hundreds of thousands of rhinos once roamed throughout Africa. Now highly organized international groups of illegal hunters are using helicopters and deploying technologies including night-vision scopes, silenced weapons and drugged darts to find and kill these giants.

"We're up against the emergence of really high-tech poachers," Lewis said. "This tactic of using helicopters and veterinary drugs on darts has really only come out in the last six months to a year. It really points to organized crime."

Most rhino horns leaving southern Africa are destined for markets in Asia, especially Vietnam, where demand has escalated in recent years.

"A lot of that has to do with how Vietnam's economy has grown astronomically," Lewis said. The country's newly affluent middle and upper class seems to be seeking rhino horn as some kind of miraculous remedy, he said, although its traditional use in Chinese medicine is for fevers and nosebleed.

Rhino horn is made from keratin, "from compacted hair, a very similar substance to the hooves of a horse or a cow, or a person's own fingernails," Lewis said. "Taking rhino horn has the same effects as chewing on your fingernails: no medicinal properties whatsoever."

With prices that high, there's also the prospect "of creating anything and calling it rhino horn," Lewis said. "People can throw in all kinds of crazy things, and it could actually be very dangerous."

Asian rhinos, which generally have smaller horns, seem to be less of a target for poachers. Still, two of the three Asian rhino species, the Javan and Sumatran rhinoceroses, are critically endangered at populations of 40 and 400, respectively, Lewis said, and only 2,400 or so Indian rhinoceroses remain in the wild.

"They were nearly wiped out 100 years ago, and they're hanging on by a thread," Lewis said. "Indian rhinos have much larger horns than the other two Asian species, and we've seen escalation to their poaching similar to Africa in the past three or four years."

"We have to raise awareness and get on top of this," Lewis concluded. "Rhinos could go extinct in our lifetime as a result of this if awareness isn't raised." He hopes increasing public awareness about the plight of rhinos could spur a crackdown on the criminals who buy and kill for these horns.