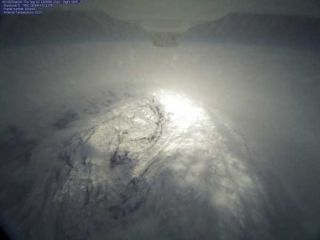 A camera aboard the Global Hawk, the unmanned drone that completed its first successful flight through a hurricane on Thursday, captured this shot of Hurricane Earl's eye from 60,000 feet (18,288 meters).
(Image: © NASA/NOAA.)

Hurricane Earl is losing steam as it tracks up the East Coast of the United States, though wary residents are still looking out for its whipping winds and pounding waves.

For a group of NASA scientists, the storm's last gasp means a few days of relative calm, after a full week of flying airplanes through the once powerful hurricane.

Yesterday, the space agency, along with the National Oceanic and Atmospheric Administration (NOAA), celebrated the first successful flight of an unmanned drone through a hurricane, a task some thought beyond the abilities of an aircraft not typically flown into rough weather.

"It was a great flight," said Scott Braun, a scientist with NASA's Genesis and Rapid Intensification Processes mission, or GRIP experiment, a field study conducting hurricane-hunting flights this summer to better understand the natural processes that control storm formation and the swift changes in a storm system's strength.

"It was a big success for us to get it out over the storm on its first attempt over a hurricane, we're very proud of that," Braun said.

The Global Hawk wasn't alone inside Earl. NASA's DC-8 aircraft, a modified commercial jetliner packed with scientists and instruments, was also flying through the storm, and the two aircraft made coordinated passes through the hurricane's eye.

A third NASA plane, a WB-57, was scheduled to fly through the storm yesterday, but was unable to get into the air because of technical problems with the aircraft.

Even though the WB-57 has experienced a few hiccups, Braun, who is also a research meteorologist at NASA's Goddard Space Flight Center in Greenbelt, Md., said the data gathered on Hurricane Earl are unprecedented.

"Not only did we catch it intensifying at the early stages, we caught the onset of the weakening," Braun told OurAmazingPlanet, "so we really have described the full evolution of the storm, which is really fantastic."

Hurricane Earl is quickly losing strength. Over the course of just a few hours on Friday morning, the storm has waned to a Category 1 storm, although it's still packing winds of 85 mph (140 kph), and officials are warning of dangerous storm surges and destructive waves from North Carolina to New England.

And although Braun said researchers captured enough raw data on Earl to keep them busy for months, the scientists are still after what he called "storm genesis."

"To really complete this field campaign, we need at least one experiment where we capture the formation of the storm," he said.

A candidate for such an experiment is lurking out in the Atlantic Ocean. The remnants of former Tropical Storm Gaston, now a mere weather disturbance, have the potential to regain strength, forecasters are saying.

NASA planes could be back in the air again next week if Gaston cooperates.