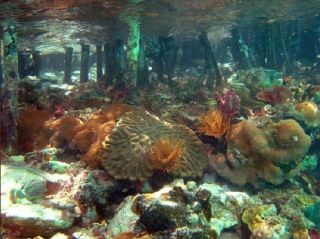 Corals that typically build the structural framework of coral reefs grow in the mangroves in Hurricane Hole.
(Image: © Caroline Rogers/USGS)

A snorkeling scientist has made a surprising discovery of 30 different species of coral tucked away and thriving among the red mangrove roots of Hurricane Hole in the U.S. Virgin Islands.

"I was just amazed at what I found," said Caroline Rogers, a coral reef ecologist with the U.S. Geological Survey (USGS). "As far as I know right now, the abundance and diversity of corals, the sheer number of different species I found in here, is unique in the Caribbean."

The corals appear in a rainbow of colors along with the animals that use them as a habitat, with vibrant magentas, turquoises and neon yellows in profusion throughout the ecosystem.

The discovery of a hidden stash of apparently healthy corals, made in March 2009, is particularly surprising because in 2005, seawater temperatures in the Virgin Islands skyrocketed to the highest on record, and a bout of coral bleaching whitened and weakened many of the coral colonies in the area.

Coral bleaching is spurred by a number of stressors, including temperature fluctuation, ocean acidification, heavy light exposure and other human disturbances, such as overfishing.

This particular event left many of the colonies around the Virgin Islands prone to a disease that eventually destroyed 60 percent of the coral cover in the area. But curiously the corals found in Hurricane Hole were spared from these threats. It's not likely that the corals are simply newer to the neighborhood and arrived after the bleaching episode though.

"Some of these corals are so big that they had to have been growing before 2005," Rogers told OurAmazingPlanet.

Among the more typical coral species in the newfound cache are newer settlers that migrated to the area on the tides as larvae. One of these is rare and a particularly strange find in these 3-foot (1-meter) shallows: The Knobby Cactus Coral, which sports brain-like grooves, is normally found at depths of 40 feet (12 m) or more.

There are several possible reasons why the corals of Hurricane Hole are thriving amid others' devastation. The mangrove canopy shields the corals from excessive light, which Rogers said might help them survive bleaching events. This area also benefits from bans on fishing and waterskiing, which upset the balance of marine ecosystems.

Figuring out what kept these corals intact could help scientists preserve other coral systems under threat. Coral reefs around the world, from elsewhere in the Caribbean to the Great Barrier Reef off the coast of Australia, are being threatened by rising ocean temperatures from global warming as well as other impacts.

The USGS is funding more research so Rogers can explore the peculiarities of Hurricane Hole's mangrove ecosystem and hopefully unearth the secrets to coral survival.