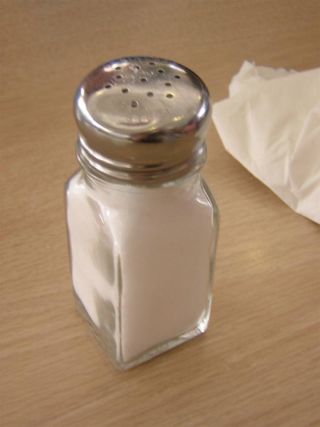 A whopping 9 out of 10 U.S adults get too much sodium in their diets, a new study finds.

Most sodium in the American diet comes from processed grains such as pizza and cookies, and meats, including poultry and luncheon meats, the report concludes.

Americans consume an average of 3,466 milligrams (mg) of sodium per day, more than twice the current recommended limit. Grains provide 36.9 percent of this total, followed by dishes containing meat, poultry, and fish (27.9 percent). These two categories combined account for almost two-thirds of the daily sodium intake for Americans. Dietary guidelines for Americans recommend less than 2,300 mg of sodium per day.

Overconsumption of sodium can have negative health effects, including increasing average levels of blood pressure.

The study, based on data from 2005-06, was released today by the U.S. Centers for Disease Control and Prevention.

An estimated 77 percent of dietary sodium comes from processed and restaurant foods, the researchers said in a statement. Many of these foods, such as breads and cookies, may not even taste salty.

"Sodium has become so pervasive in our food supply that it's difficult for the vast majority of Americans to stay within recommended limits," said Janelle Peralez Gunn, public health analyst with CDC's Division for Heart Disease and Stroke Prevention and lead author of the report. "Public health professionals, together with food manufacturers, retailers and health care providers, must take action now to help support people's efforts to reduce their sodium consumption."

Specific groups, including people with high blood pressure, all middle-aged and older adults and all blacks, should limit intake to 1500 mg per day, according to the CDC. These specific groups comprise nearly 70 percent of the U.S. adult population.

One in three U.S. adults has high blood pressure, and an estimated 90 percent of U.S. adults will develop the disease in their lifetime. Blood pressure is a major risk factor for heart disease and stroke, the first and third leading causes of death among adults in the United States.