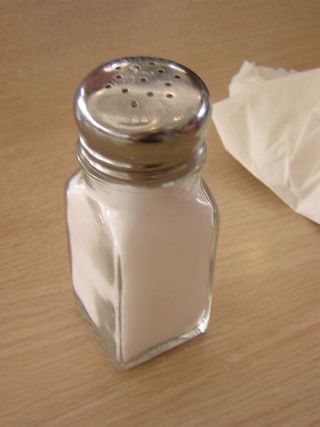 Some people experience the taste of salt more intensely than others, and this taste difference might be due, at least in part, to hereditary factors, a new study suggests.

So-called "supertasters" taste saltiness, bitterness and sweetness more acutely than others, said study researcher John Hayes, an assistant professor of food science at Penn State University. This heighted salt sense can lead to an increased consumption of snack foods, which usually have saltiness as their primary flavor, he said.

Salt has been in the spotlight recently, with many public health experts calling for manufacturers and restaurants to cut back on salt added to foods. In April, the Institute of Medicine released a report urging the federal government to step in and limit salt levels in foods. Diets high in salt are concerning because salt is thought to increase the risk of high blood pressure and stroke.

The research involved 87 participants who sampled salty foods, such as broth, chips and pretzels, on multiple occasions, spread out over weeks. They were also interviewed by a nutritionist and kept food records to gauge how frequently they ate certain foods. Test subjects were 45 men and 42 women ranging in age from 20 to 40 years.

The participants were broken up into three groups — supertasters, medium tasters and nontasters — based on their ability to taste a certain chemical compound known as propylthiouracil. Some perceived the substance to have an extremely bitter taste, while others hardly tasted a thing. How sensitive a person is to the bitter taste is genetic.

The participants then rated the intensity of taste of the various foods on a commonly used scientific scale, ranging from barely detectable to strongest sensation of any kind.

Those classified as supertasters reported tasting more saltiness in liquid-salt solutions than nontasters and medium tasters, and they were also more sensitive to changes in salt levels in broth and cheeses. Supertasters also indicated in their diaries that they ate more high-salt foods than those in the other groups.

However, supertasters reported adding less salt to foods than nontasters, presumably because nontasters need more salt to get the same perception of saltiness as supertasters, Hayes said. "However, most of the salt we consume comes from salt added to processed foods and not from the salt shaker," he said.

Supertasters might also struggle with low salt levels in foods, because they need the salt flavor to mask the bitterness present in certain foods.

"For example, cheese is a wonderful blend of dairy flavors from fermented milk, but also bitter tastes from ripening that are blocked by salt," Hayes said. "A supertaster finds low-salt cheese unpleasant, because the bitterness is too pronounced."

Hayes advises consumers to lower their salt intake by reading the food label and looking for products that contain fewer than 480 milligrams of sodium per serving.

The results were published June 16 in the journal Physiology & Behavior.