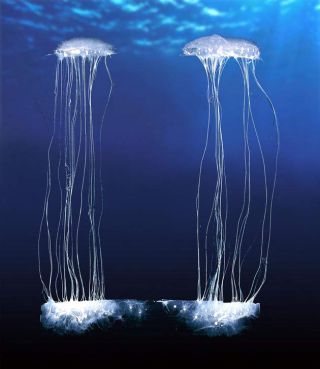 Groups of axons that have been stretched to 2 inches (5 cm) long.
(Image: © Douglas Smith, Univ. of Pennsylvania)

Blue whales can wiggle their tails. That's far from surprising to almost anyone except a neurobiologist. But the sea mammal's ability to communicate between its brain and its tail 75 or more feet away has inspired a group of scientists to find a new way to grow nerves in the laboratory.

Such nerves might someday help people with spinal injuries and other conditions—such as certain types of blindness—in which nerves have been severed.

The group's goal, says Douglas Smith, director of the University of Pennsylvania's Center for Brain Injury and Repair, is to span gaps in damaged nerves. Other scientists have concentrated on growing nerve fibers, or "axons," by increasing the growth rate at their free ends.

Any nerve starts as a neuron cell that spouts nerve fibers. This axon, in turn, grows from the "growth cone" at its tip until it reaches a particular neuron to complete its circuit.

Most nerve-growth research has concentrated on enhancing the growth cone's effectiveness as axons reach across biological chasms to reach target neurons. But not only is this process slow, in the laboratory it hasn't produced nerves that are nearly long enough to span the gaps produced by human spinal cord injuries and many other types of nerve damage.

Scientists have thought that these cellular baby steps were the only ways nerve tissue grows and that the most an axon could grow in a day was less than one-tenth of an inch (1 millimeter), Smith explains. That's where the whales come in.

Baby blue whales grow about 1.6 inches (4 centimeters) per day. And because at birth a nerve already connects whale brain to whale tail, there is no exposed axon tip, and so no growth cone, to drive this breakneck growth rate.

"In theory all that we've learned about path finding with an axon growth cone doesn't apply," Smith said. "Those axons are growing in a completely different way, one that has never been studied."

The likely explanation, he says, is that these nerves, and possibly all nerves, have a second way to grow, one that accelerates the cellular processes. "The one thing that must be the driving force is mechanical," Smith said. As a whale—or whatever—grows, nerves stretch, but get thinner as well. If this thinning were to continue until the whale was whale-sized, the nerves would be stretched impossibly thin. But somehow the nerves thicken as the creature matures.

Smith's group is imitating this natural system to make bundles of long nerves, so-called "three-dimensional neural networks," that one day might serve as a bridge across damaged nerves.

The scientists start with rat neurons, which they sprinkle onto two plastic, nutrient-stuffed plates. As any neuron would, these sprout axons, the nerve fiber itself. Then the scientists place the plates close to each other, coaxing the axons' growth cones on each plate to connect to neurons on the other, resulting in complete, intact nerves that run from plate to plate.

Next computer-controlled micromotors slowly separate the plates (too fast and they'll snap), stretching the nerves like a heretic on a medieval rack.

Currently the nerves can be stretched up to nearly a half-inch (1 centimeter) per day and have been grown up to 4 inches (10 centimeters) long.

Smith's group then processes these elongated nerves to construct a portable neural network. The nerves are removed from the culture environment in which they were grown and are covered with a bed of nutrient-rich collagen, which is then rolled up like a Hostess Ho Ho.

A member of Smith's group, Akira Iwata, has implanted nerve rolls into laboratory rats, bridging cuts in the animals' spinal cords. The imported nerves not only survived for at least a month but also connected with nerves in the rats' spinal cords. This work was described in the February 2006 issue of the journal Tissue Engineering.

Soon, Smith says, the group plans to test whether the new nerves can actually transmit information. Just watching the animals to see if they recover isn't enough, since—fortunately for rats but unfortunately for this experiment—rats are far better at surviving spinal cord injuries than humans.