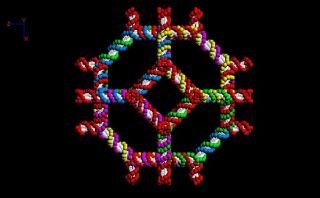 Seeman and company designed this truncated octahedron from a kit of DNA stick figures.
(Image: © Seeman)

As if the blueprint for life wasn't busy enough, nanotech researchers are putting DNA to work in tiny mechanical devices and as templates for electronic circuits.

The first person to see DNA's potential beyond biology was Naiman Seeman, a chemist at New York University. More than twenty years ago, he began imagining how the genetic information in DNA might be engineered to perform useful tasks.

"DNA structures are programmable by sequence, and so are their intermolecular interactions," Seeman says. "That makes them unique."

Whereas nature alone dictates how most molecules interact, DNA comes with a built-in code that researchers can re-formulate to control which DNA molecules bond with each other. The goal of this DNA tinkering is microscopic factories that can produce made-to-order molecules, as well as electronic components 10 times smaller than current limits.

"Nanofabrication is where we are going," Seeman told LiveScience. "It will happen soon."

A single strand of DNA is essentially a long sequence made up of the chemical bases adenine (A), thymine (T), cytosine (C) and guanine (G). Every living thing carries a unique genetic code in its cells written out in these "letters."

Two strands of DNA can fuse together and form the famous double helix, discovered by Crick and Watson in 1953. But this twisted ladder arrangement can only happen if all the bases on the two strands match up, so that A's bond with T's and C's bond with G's.

Scientists use this selective adhesive to build and control DNA machines.

"The bonds are like smart glue that know which pieces go together," explains Thomas LaBean of Duke University.

LaBean and others typically begin with a design for a structure that has several DNA pieces. A computer program writes out the code for the different strands, which are then synthesized using standard biological methods. Mixed together in a water-based solution, the pieces with matching codes will link up to form several copies of the desired structure.

It's like an airplane model kit, except all you have to do is shake the box and all the little parts automatically find each other and glue together.

DNA in nature is often just one long continuous chain, but researchers would prefer to have other shapes at their disposal.

More than three decades ago, biologists discovered that cells create cross-shaped DNA molecules during replication and repair. The side-arms, or branches, grow out of a genetic code whose letters read the same forwards and backwards, like the palindromes "racecar" and "rotator."

Seeman and others have modified the sequence of palindromic DNA to make a stable 4-armed molecule. They have also coaxed DNA to branch with 3, 5 and 6 arms.

These two-dimensional stick figures are only a few nanometers across, where a nanometer is one billionth of a meter. Researchers design them with "sticky ends"—single DNA strands that act as latches between molecules. Whole arrays of these connecting figures can be put together like pieces in a puzzle.

Earlier this year, LaBean and his collaborators built 4x4 lattices with 16 cross-shaped DNA pieces. By attaching a type of protein to specific "pixels" on these grids, the team spelled out "DNA."

The ability to attach particles to DNA pieces is a step towards fabricating nano-electronics. Scientists can hitch functional materials like metals, semiconductors and insulators to specific DNA molecules, which can then carry their cargo to pre-specified positions. Already this technique has been used to make a simple transistor, as well as metallic wires.

There is a problem, however, in making more complicated components. To keep negatively-charged DNA stable, researchers add positive ions to their solutions. But these ions can interfere with the functional materials needed to build electronics.

"It is difficult to keep all these things happy at the same time," LaBean says.

A solution might be to use a DNA-like molecule that is uncharged and yet has the same code as DNA. There are about 1000 "flavors" of DNA derivatives, Seeman says, so one of these might do the trick.

Trouble is these alternatives can be 10 times more expensive to make than regular DNA, according to LaBean. It could be worth it, however, as computer chip manufacturing techniques currently cannot go smaller than tens of nanometers.

Self-assembling arrays of DNA-like molecules could go beyond this limitation, by providing the scaffolds for nanometer-scale circuits. This would not only make our computers and other devices more compact, but faster as well.

Besides controlling the shape of DNA assemblages, researchers can use specific DNA attachments to move other DNA molecules.

One of the first demonstrations of this came in 2000, when a group from Lucent Technologies in New Jersey fabricated a short V-shaped DNA molecule that acted like molecular tweezers.

Placing several copies of their molecule in solution, the researchers could snap the tweezers shut by mixing in another DNA molecule, called a "set strand," that bonds specifically to the two ends of the "V" and pulls it closed. To reopen the tongs, the science team added an "unset strand," which links to the set strand and pulls it off the tweezers.

Using a similarly orchestrated movement, Seeman and his colleagues in 2004 made a two-legged DNA molecule that could walk. The feet were anchored to a DNA-studded floor by set strands. The tiny biped took a step whenever the group introduced unset strands that freed one leg at a time.

More recently, Seeman and colleagues have put DNA robots to work by incorporating them into a self-assembling array. The composite device grabs various molecular chains, or "polymers," from a solution and fuses them together. By controlling the position of the nano-bots, the researchers can specify the arrangement of the finished polymer.

Seeman hopes this tiny assembly line can be expanded into nano-factories that would synthesize whole suites of polymers in parallel. The major challenge now is going from 2D arrays to 3D structures. The extra dimension would allow the fabrication of more elaborate molecules, as well as denser electronic circuits.

In the future, doctors might inject variants of these automated DNA machines into the body, either as bio-sensors or as drug delivery systems that can target specific sites like tumors or blood clots, LaBean said.

Although some of these applications may be several years down the road, progress in DNA nanotech "has become a lot faster now that there are 20 or more groups doing it rather than just my own," Seeman said.