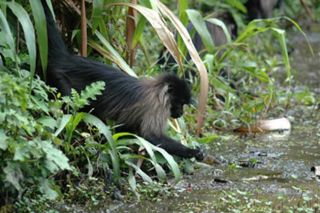 Gray-cheeked mangabey feeding on water plants at the edge of a pond in Kibale National Park, Uganda.
(Image: © Rebecca Chancellor)

Some monkeys plan for a day of fruit and bug foraging the same way people plan for a picnic--they keep an eye on the weather.

A new study reveals that gray-cheeked mangabeys wait out cloudy days and go fruit picking when the sun shines. The finding provides insight to what may have driven the evolution of cognitive skills in primates.

From dawn to dusk for 210 days, researchers from the University of St. Andrews in Scotland followed every move of a group of wild gray-cheeked mangabeys in the Kibale Forest in Uganda. The scientists compiled a nearly complete record of the monkeys' foraging decisions for figs, their favorite food.

Not only were the monkeys more likely to return to trees where they had previously found fruit, they were also more likely to forage when it was warm and sunny than cloudy and cool. Warm temperatures and solar radiation combine to speed the ripening of the figs as well as the growth of insect larvae squirming inside some fruit, which the monkeys extract for a tasty snack.

This behavior, the scientists say, was related to monkeys remembering past weather conditions rather than more simplistic sensory cues such as the scent of ripe fruit.

The finding supports the idea that monkeys make foraging decisions based on a combination of "event-based" memories, such as which trees bear the best fruit, and the knowledge of recent and present weather conditions as well as how those conditions affect fruit and insects.

The study, detailed in the June 20 issue of the journal Current Biology, also strengthens theories on the evolution of primate cognitive skills, which scientists think developed in part as a result of ecological challenges associated with foraging for intermittently available food.