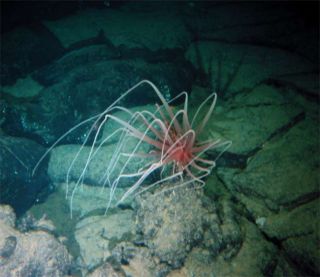 Hot springs beneath the ocean called hydrothermal vents are often teeming with alien-like life. So when scientists spied a nearly desolate vent beneath the Pacific Ocean they were perplexed. Apparently a volcanic eruption had wiped the system clean of most life.

More surprising, the baby snails and other critters beginning to populate the area were not the usual suspects from neighboring hydrothermal vents, but rather had migrated up to hundreds of miles.

The researchers now think the larval forms of these animals hitched rides on ridge-crest jets and other ocean "superhighways."

This discovery has led to a shift in theories of how undersea life is distributed following a volcanic eruption.

Hydrothermal vents, which release warm, mineral-rich fluids, are hot spots for deep-sea organisms, such as tubeworms and snails. Some microbes survive through chemosynthesis, a sunless seafloor version of photosynthesis.

Until now, scientists thought that after sea life is wiped out by a volcanic eruption, it gets replaced by a pool of tiny creatures from nearby vents.

Scientists from the Woods Hole Oceanographic Institution (WHOI), in working with several other institutions, examined a vent along the East Pacific Rise, an underwater mountain chain, following a 2006 volcanic eruption.

They found the larvae that re-settled in the vent area were noticeably different from both the previous inhabitants and the nearby ecological communities. One of the "pioneer species" discovered is Ctenopelta porifera, a species of sea snail that has become prominent in the area.

Ctenopelta had never been observed there before and the nearest known population is more than 200 miles (350 km) to the north, said Lauren S. Mullineaux, a senior scientist in WHOI's biology department.

"These results show clearly that the species arriving after the eruption are different than those before," Mullineaux said.

In trying to determine how weak-swimming larvae could disperse over such vast distances in order to reach the decimated vent area, the research team developed a model showing how larvae could travel up to 4 inches (10 centimeters) a second riding on ocean-bottom "jets."

"Either the larvae are using some other transport or they are living longer than we thought," Mullineaux theorized, since ridge-crest jets may not quite be able to transport the larvae across 350 kilometers within the time frame of their 30-day lifespan.

Mullineaux speculates the migrating larvae might be propelled even faster to their new homes while they are still alive by large eddies, or whirlpools of water that are several hundred kilometers in diameter.  Another possibility is that the larvae are able to somehow reduce their metabolism and extend their lifetime.

Scientists believe that the findings have implications for a wider distribution of undersea life and the manner in which species disperse and colonize remote habitats.

The research is published this week in the journal Proceedings of the National Academy of Sciences.