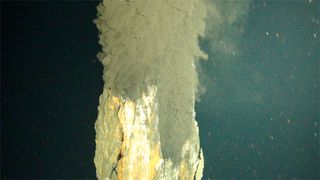 Beneath the Caribbean Sea a remotely controlled vehicle came upon the world's deepest hydrothermal vents, where super-heated mineral-rich water gushes from chimney structures onto the ocean floor. The black smokers, named for how they spew out an iron sulfide compound that's black, sit 3.1 miles (5 kilometers) deep in the Cayman Trough in the Caribbean. While black smokers are the hottest of the undersea vents, white smokers are cooler and often contain compounds that are white in color. Until now, the deepest known vents had been found some 2.6 miles (4.2 km) below the sea surface. "It was like wandering across the surface of another world," said geologist Bramley Murton of the National Oceanography Centr (NOC) in Southampton, who piloted the HyBIS underwater vehicle that filmed the Caribbean vent. "The rainbow hues of the mineral spires and the fluorescent blues of the microbial mats covering them were like nothing I had ever seen before." Like this newly discovered undersea vent, most vents are found along the Mid-Ocean ridge system, which is a chain of mountains that wends the globe like the seams on a baseball. There, giant slabs of Earth are often moving apart to create cracks where lava can make its way onto the surface. The first of these vents was discovered in 1977 on the Galapagos Rift off the coast of Ecuador. It might seem the scorching water spouting from the vents would be a "danger" sign to any life forms. But it turns out alien-like creatures that can withstand the heat and suffocating pressure thrive there. For instance, vents in the Pacific Ocean are known to teem with tubeworms and giant clams, while the Atlantic variety is typically home to eyeless shrimp and other extreme residents. The pressure at the bottom of the trough, which is 500 times normal atmospheric pressure, would be the equivalent to the weight of a large family car pushing down on every square inch of the creatures that live there, the researchers say. In addition to the HyBIS vehicle, the researchers used a robot submarine called Autosub6000 to survey the seafloor of the Cayman Trough. Next, the team will compare the marine life in the abyss of the Cayman Trough with organisms found at other deep-sea vents. They will also study the chemistry of the super-hot water and the geology of the undersea volcanoes where the vent system is found. In general, studying the life forms that thrive in such unlikely havens could provide insights into the possibility of life on other planets, and even how life on Earth began.