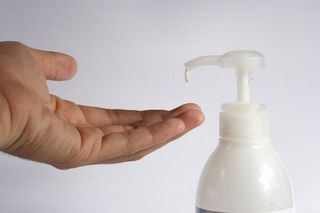 If asked to describe how skin cream feels, you might use words like "smooth," "thick," or "greasy."

But for Ohio State University mechanical engineering professor Bharat Bhushan, these words aren't good enough. Using a special instrument, he has gleaned new understanding of how these creams interact with skin on the nanoscale, bringing a more quantitative measure to the smooth sensation.

Skin creams are mixtures of oil and water, and they basically soften the skin by returning moisture to it, and holding moisture in. But the way the cream feels really comes down to how much friction it creates as you apply it to your body. Factors such as the cream's thickness and how fast you rub it in both affect friction, Bhushan and colleagues found.

Skin creams contain humectants and emollients that keep your skin moist. Humectants such as glycerin remove water from the air and lock it in your skin, while emollients such as mineral oil fill the gaps between skin cells, thus smoothing it out, according to the Mayo Clinic.

Whether or not the cream feels greasy comes down to the properties of the emollients. These substances can be oil-based, consisting of mostly oil with a small amount of water dissolved in it, or water-based, which are almost all water. Creams with more oil will leave behind more residue on the skin and thus feel greasy, while water-based creams won't leave much residue and feel lighter, the Mayo Clinic says.

While you may find that greasy feeling annoying, creams with more oils are likely to stay on your skin longer. If you have dry skin, you're better off going with an oil-based cream, while those with oily skin should look for water-based creams, the Clinic says.

Bhushan's team has added some micro-level detail to these well-known general cream properties.

Applying the cream creates vibrations that are then detected by your brain, Bhushan explains.

Currently, skin cream manufacturers use a not-so-scientific method to test their product smoothness: They set up focus groups and take surveys asking how the cream feels. With this approach, "You get a measure of performance, but you really don’t know what's going on," Bhushan said.

Bhushan and his colleagues set out to measure the friction of different skin creams using an instrument called an atomic force microscope. The instrument has a sharp tip, which can rub against the sample and measure friction. In effect, the machine simulates a single point of contact on the body, and reveals information about the interaction between the skin cream and the skin itself at that point.

Regardless of ingredients, thicker or more viscous creams created more friction. Friction is the enemy of smoothness, so to speak, and more friction means a rougher feel, according to Bhushan. The researchers also saw that the speed at which the cream is applied plays a very big role in how it is felt.

And while temperature had a large effect on overall smoothness, humidity did not.

Overall, the team was able to gather information that is not possible at the larger scale on which humans see and feel.

"We can measure charge, we can measure the softening characteristics, we can measure friction, and all of those things; we can understand how it really affects a certain property," Bhushan said. "So it gives us a lot more information than you have just by testing the product on the human subject."

Skin cream manufacturers may be able to use this nanoscale information to create more effective and desirable products.

Next, Bhushan will use the same technique to examine the exact mechanism by which skin creams soften skin.