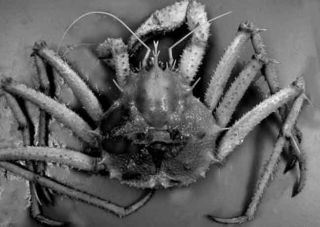 The image shows Lithodes galapagensis, the only king crab species yet recorded from the seas around the Galapagos Islands.
(Image: © NOCS)

Kings crabs are among the ocean's largest crustaceans, so you'd think scientists might know quite a bit about them.

As with much in the sea, however, there is much to learn.

Importantly, one of the new species lives around the Galapagos Islands, in warm water. King crabs had once been thought to be confined to chilly climes.

"We are only now beginning to understand the incredible diversity of animals living in the deep sea," said Sally Hall, a doctoral student at the University of Southampton and the discoverer of the new species.

"King crabs include some of the largest crustaceans currently inhabiting Earth," Hall said.

It is now clear that species of deep-sea king crab live in most areas of the world's oceans, but many more species remain to be discovered.

"The oceans off eastern Africa, the Indian Ocean and the Southern Ocean are all particularly poorly sampled," said Hall: "We need to know which king crab species live where before we can fully understand their ecology and evolutionary success."