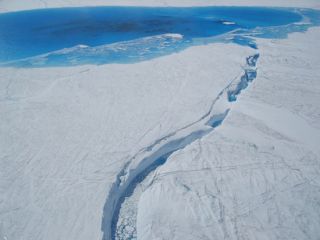 Melt lake on the surface of the Greenland Ice Sheet and over flow channel leading to a moulin (glacial conduit through which water reaches the glacier bed from the surface).
(Image: © © Science)

Most of us have heard the predictions: the meltdown of Arctic sea ice and mountain-top glaciers; extinction of species ranging from polar bears to coral reefs; catastrophic sea level rise that could eventually force the relocation of millions of coastal residents. Heat waves, malnutrition and famine, and wildfires would also be a greater risk to human communities if carbon dioxide levels in Earth's atmosphere are allowed to rise too high.

Specifically, these could be the characteristics of a world where carbon dioxide has risen to 1,000 parts per million by 2100, as described this week in a Nature opinion essay by Stephen Schneider of Stanford University. (Currently carbon dioxide is at about 384 parst per million.)

Reaching this level of carbon dioxide by the end of the century was presented as a worst-case scenario if nothing is done to curtail emissions in a 2000 special report by the Intergovernmental Panel on Climate Change (IPCC).

Until the economic downturn late last year, actual emissions have been higher than those in the IPCC scenario. So without any mitigation, "that's the track we're on now," Schneider told LiveScience.

Schneider doesn't think emissions will continue on this path, however: "I don't think the world is going to be that stupid for most of the century," he said.

Eventually, as we see more of the effects of warming, Schneider thinks that people will be galvanized into action and begin implementing cleaner technologies and cutting emissions.

But that still leaves the question of how much to cut them by. Two new studies, in the same issue of Nature, hope to clear the air by finding a different way to ask the question: "How much carbon is too much?"

The potentially drastically different world that awaits us if global warming continues unabated is something scientists have been warning about for decades now. The solution has also long been clear: Curb carbon dioxide and other greenhouse gas emissions.

But finding an agreement among the world's governments on how to go about cutting emissions, how soon to cut them, and how much to cut them by has been a much more challenging task.

Having a better understanding of what kind of emissions reductions are needed is particularly important with new negotiations this year to extend and amend the Kyoto Protocol, an agreement between nations to reduce emissions that is set to expire in 2012 (one that the United States never signed).

At the Earth Summit, held in Rio de Janeiro in 1992, 192 nations agreed to "to achieve stabilization of greenhouse gas concentrations in the atmosphere at a low enough level to prevent dangerous anthropogenic interference with the climate system."

Scientists "have been preoccupied ever since in trying to decide what that level is," said Myles Allen of Oxford University, and lead author of one of the new studies. Most countries have proposed either stabilizing emissions to achieve a certain carbon dioxide concentration in the atmosphere, or curbing emissions to stay under a maximum number of degrees of warming.

But under those frameworks, "you'd never really know what it was you were allowed to emit," said Gavin Schmidt of NASA's Goddard Institute for Space Studies in New York. Schmidt, who was not involved with the two new studies, wrote an accompanying editorial piece in same issue of the journal.

Given uncertainties in the climate system, figuring out how much warming would actually occur has proven difficult.

So Allen and his colleague and Malte Meinshausen of the Potsdam Institute for Climate Impact Research in Germany and his colleagues took a different approach: Using computer models of various emissions scenarios and climate factors, they estimated the total amount of carbon that could be emitted and keep the world from going over 2 degrees Celsius (3.6 degrees Fahrenheit) of warming above pre-industrial levels (a goal adopted by many countries), which is just a 1.2 degrees C rise from today.

That may seem like a lot of carbon, but that's only one quarter of the known economically recoverable fossil fuel reserves. And the world has already emitted one third of that budget in just nine years.

"If we continue burning fossil fuels as we do, we will have exhausted the carbon budget in merely 20 years, and global warming will go well beyond 2 degrees," Meinshausen said.

Put another way by Allen, a total emission of one trillion tones (1.1 trillion tons) of carbon over the entire period from 1750 to 2500 would likely cause a peak warming of 2 degrees C. About half of that has already been emitted since industrialization began.

(The studies use different units and different base periods, which is why their numbers are different.)

What the studies effectively show is that it's the total amount of carbon emitted, not the pace or timing of emissions that determine most of the warming response.

"Mother Nature doesn't care about dates," Allen said. "To avoid dangerous climate change, we will have to limit the total amount of carbon we inject into the atmosphere, not just the emission rate in any given year."

Schmidt cautions, though, that the 2-degree limit is not a magic number that we are "safe" below or in danger above. He thinks of the 2 degrees Celsius of warming proposed by many countries as "a speed limit on the situation," he told LiveScience. It lets you know when you're going too fast and might be in danger of a crash, but you could still have an accident at a slower speed.

While the idea that it's the total amount of carbon that ultimately determines the total amount of warming isn't new, this is the first time it's been used to frame the emissions reduction question. Allen, Meinshausen and their colleagues hope that it will give policy makers a clearer picture of the situation and a better basis for determining how to make reductions.

"By treating the effective 'CO2 capacity' of the atmosphere as an exhaustible resource, we could provide governments and industry with simple, clear, and tractable guidance for long term planning," said David Frame, also of Oxford University and a co-author of Allen's study.

Schmidt took the data from the studies and looked at the total emissions that would occur if all developed countries adopted the plan proposed by President Obama to lower emissions 80 percent by 2050. If this happened, the world would have a roughly 50/50 chance of staying under the 2 degree benchmark, Schmidt said.

He noted that this framing could help policy makers see that "if you do all these things, it will make a difference. In fact, it will make the difference." (A common objection to the Kyoto Protocol was that its requirements would have little effect on warming trends.

Meinshausen's team is slated to discuss their findings with Germany's Chancellor Angela Merkel. Allen's team has also talked to economists and works with the UK Climate Change Committee, which advises Parliament.

Schneider agrees that the approach is useful for policy, but thinks that it shouldn't be necessary to persuade people that the climate risks are high enough that we need to act. The probability of the catastrophic outcomes he described in his essay coming to pass are between 5 and 10 percent, he wrote. This is far below the 1 to 2 percent chance of having a fire in your house, "yet we buy insurance because of the consequences of the outcome," he said.

But the next step is largely in the hands of governments and other policy makers, who will have to decide and how they want to make emissions reductions.