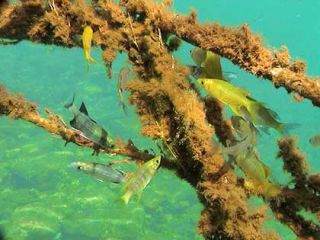 He's quite handsome and he's got all the right moves. He looks foreign, but his courtship is intoxicating. You decide to spawn with him—oh, yes, I forgot to mention, you're a female fish—and then, the horror! Instead of fertilizing your eggs, the little devil eats them!

Such are the games sailfin silversides play. Several species of the small, brightly colored fishes inhabit the Malili Lakes of Sulawesi, Indonesia.

Suzanne M. Gray, now at Queen's University in Kingston, Ontario, went to Indonesia in 2003 and 2004 to study one of them, Telmatherina sarasinorum, which lives only in a single lake. Now she and three colleagues report four sightings of T. sarasinorum males that each followed a courting pair of the closely related species T. antoniae, and that eventually chased off the courting male, took his place, enticed the female to spawn, and then devoured her eggs.

An unrepentant cannibal, T. sarasinorum regularly eats eggs of its own species, as well as those of others. Some males even gobble up eggs they may have fertilized themselves, especially when their paternity is in doubt (cuckolders abound in this decidedly sneaky species).

So perhaps the false courtship is nothing more than a misdirected innate behavior followed by a normal caviar meal. It's tempting, however, to see the dastardly deed as a Machiavellian attempt by one fish to deceive another to get food.

The findings were detailed in the Journal of Fish Biology.