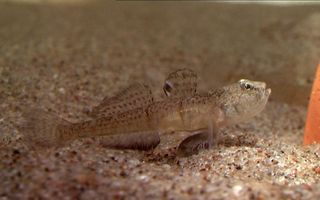 In this sand goby fish, the males alone take care of the eggs. Males tend to eat up to a third of the eggs.
(Image: © Kai Lindström.)

Kids taking too long to grow up? Just eat 'em.

When offspring don't move out from home, humans might gently encourage their children to leave, but sand goby fathers might devour them.

These new findings shed light on why parents might cannibalize their own young.

A wide range of animals gobbles their own kids — polar bears, burying beetles, hamsters, wolf spiders and a range of fish species. Such actions are puzzling, given all the time and energy that goes into producing offspring that are supposed to continue one's genetic legacy.

To further understand why such cannibalism might happen, scientists focused on the sand goby (Pomatoschistus minutus), a fish in which the males alone take care of the eggs.

"Overall, dad does a pretty good job of taking care of the eggs, except for one thing — he tends to eat about a third of them," said researcher Hope Klug, an evolutionary biologist at the University of Helsinki in Finland. "Based on previous work in this species, we know that the males aren't just doing this because they're hungry — even when they have excess food, they continue to eat a really large number of their own eggs."

The question the researchers had going in: If a father is going to eat his offspring, which offspring will he eat?

The researchers had male sand gobies each mate with two females, one after the other. The males then raised both their clutches of eggs at the same time.

The scientists found the males preferred to eat larger eggs — which take longer to hatch — from the second female they spawned with. They conjecture the fish do so to cut down on the amount of time spent caring for their young, thereby enabling the dads to reenter the mating game sooner.

Sand goby dads have to care for thousands of eggs "until they hatch — about one to two weeks — and during this time he isn't able to attract any new females," Klug explained. Eating his young might "allow him to increase the total number of offspring he produces over the breeding season."

The researchers noted this work highlights the potential conflicts that exist between parents and offspring in animals. "As humans, we tend to think of parental care as a very loving and nurturing behavior, which it of course is most of the time," Klug told LiveScience. "But sometimes there is a darker side to parental care, and understanding behaviors such as filial cannibalism often requires a very close look at what's going on."

Klug noted there are several reasons parents might eat their young, none of which are mutually exclusive. For instance, they could be weeding out inferior offspring, or they could very well be hungry.

"Understanding why animals behave the way they do is essential for a range of applied applications, such as conservation programs," she added. "For example, many of us have probably heard about the polar bear mom that ate some of her cubs in a German zoo recently. Simply assuming that such behavior is abnormal is probably not a very productive approach in the long term. Instead, it might be more useful to ask what causes animals to exhibit such behavior."

Klug and her colleague Kai Lindström detailed their findings online Feb. 6 in the journal Biology Letters.

Why Some Animals Eat Their Offspring