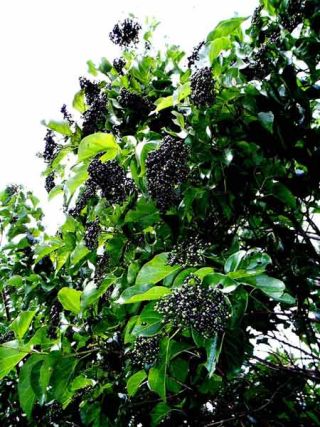 Premna obtusifolia, or False Elder, the fruiting tree on the island of Guam that Rogers and her colleagues addressed in the study.
(Image: © Haldre Rogers, University of Washington)

Can forests that have lost all of their birds still function normally? This is an important question for the now bird-less forests on the island of Guam, an island in the western Pacific. How did Guam lose its birds? In the mid-1940s, the brown tree snake was accidentally introduced to what was then snake-free Guam. This snake became Guam's new top predator and ate its way through a buffet of the island's bird community. As a result, 10 of the island's 12 forest bird species are now extinct on Guam and the two surviving forest bird species remain only in tiny, localized populations where snakes are controlled. Guam's now silent forests currently hold about 13,000 snakes per square mile. I started to think about the potential ecological impacts of bird loss in 2002, when two years out of college, I was hired by the U.S. Geological Survey to develop a "Rapid Response Team" that would identify and eradicate new populations of brown tree snakes on U.S.-associated Pacific Islands. Although I had heard the snake story in my college conservation biology course, I did not know where Guam was when I applied for the job.  Yet, three weeks later, I was on a plane headed there.

As I worked on Guam during the next three years, I often wondered why no one was studying how Guam's bird losses impacted the forests' remaining organisms. So in 2005, I began a Ph.D. program in biology at the University of Washington to investigate how bird loss changes the movement of seeds around Guam's forests. This spring, I, along with my co-advisers Joshua Tewksbury and Janneke Hille Ris Lambers, our collaborator at the University of Guam Ross Miller, and my field assistant Theresa Feeley-Summer, began to examine whether the loss of birds had caused changes in how the seeds they typically eat are distributed.    The study is funded by the Budweiser Conservation Scholarship and the National Science Foundation (NSF) Integrated Graduate Education, Research, and Training (IGERT) and Graduate Research Fellowships. In this study, we set seed traps at various distances from fruiting False Elder (Premna obtusifolia) trees in the forests of Guam and Saipan, a nearby island with birds, and then counted the number of seeds that fell into each trap.  This shows us how far the seeds of fruiting trees are traveling in Guam's bird-less forests as compared to Saipan's forests with birds.

Screen-door netting and a mile of PVC

The first step in our research was to design traps to catch falling seeds using locally available materials.  This task required many trips to the new Home Depot on Guam; we purchased the store's entire supply of screen-door netting, flexible PVC piping and PVC connectors.  Believe me, I got some strange looks when I asked the Home Depot sales person for 2,000 feet of screen-door netting and a mile of PVC.   Although our study is still ongoing, we have already produced some important results: we found that all of the seeds from the fruiting trees on Guam remained near their parent trees and maintained intact seed coats. By contrast, many more of the seeds from the fruiting trees on Saipan were found without seed coats away from their parent tree. The differences between the distributions of the seeds on Guam and Saipan can be attributed to the differences in their bird populations: In Saipan's forests, birds stop at fruiting trees, eat fruit, swallow the seeds and then fly to the next tree, where they defecate, effectively moving seeds away from where they are produced. We believe the handling of seeds by birds removes the seed coat and promotes the germination of seeds. In the bird-less forests of Guam, however, fruits ripen, fall off of the tree and settle at tree bases without being eaten or moved by birds.   Unfortunately, our results do not bode well for the future of Guam's fruit-producing trees. Research from around the world has shown that seeds from fruits falling under parent trees (like fruits in Guam) tend to experience higher mortality from predators and fungal infections than seeds that are moved away from their parent trees. In addition, for many species, seeds that are not handled by birds are less likely to germinate than seeds that are handled by birds.

Where will our research go from here? I hope that Home Depot has restocked its screen-door netting and PVC piping, because we plan to construct about 1,000 more seed traps.  We will use them to study seed dispersal for 14 more species of trees.  This will give us a community perspective on seed dispersal patterns.   We will also investigate how the lack of bird handling and seed dispersal by birds impacts the germination and growth rate of seeds. In addition, we will evaluate the impacts of bird loss on local people by interviewing people who extract forest products for traditional uses. Several tree species used for medicinal purposes or as carving wood have seeds dispersed by birds, and thus may be experiencing population declines noticed by local people.   Although the introduction of a non-native snake caused Guam's bird loss, other factors are causing bird losses in forests around the world. The ecological impacts of all of these declines — no matter what the cause — are likely to be similar. Therefore, the complete loss of Guam's birds provides an extreme example that can inform us about the ecosystem impacts of bird losses around the world.  The results of our research may be used by conservationists to develop and apply timely management approaches that will minimize the ecological impacts of bird loss. A video of the researcher setting seed traps is posted here.