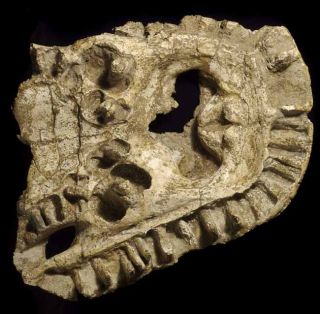 Teeth are visible along the edge of this temnospondyl fossil, and also can be seen spaced out across the palate roof about one-third of the way up in the photograph.
(Image: © Christian Sidor)

A prehistoric predator that looked like a big crocodile paddled around the Antarctic region 240 million years ago, sporting sizable fangs not only along the edge of its mouth but also halfway down the roof of its mouth.

The newly described freshwater species, Kryostega collinsoni, is a temnospondyl, a once-diverse but extinct group of amphibians that lived during the Triassic period, when dinosaurs first showed up. Temnospondyls are extinct cousins of modern salamanders and frogs.

This one was probably about 15 feet in length with a long and wide skull even flatter than a crocodile's. Its side teeth were more than an inch tall, and its tallest "palatal" fang on the roof of its mouth was even scarier at an inch and a half high.

"Its teeth, compared to other amphibians, were just enormous. It leads us to believe this animal was a predator taking down large prey," said Christian Sidor, a University of Washington associate professor of biology and curator of vertebrate paleontology at the Burke Museum of Natural History and Culture.

"We think Kryostega was an aquatic animal, so it probably ate mostly fish and other amphibians living in the river alongside it," he said. "However, like modern crocodiles, if land-living animals strayed too close to the river's edge, I expect that it would have been able to drag them in.

Sidor headed up a study of the new species detailed in the September issue of the Journal of Vertebrate Paleontology. His colleagues on the work included Ross Damiani of Staatliches Museum für Naturkunde Stuttgart in Germany and William Hammer of Augustana College in Rock Island, Ill. The work was funded in part by the National Science Foundation and the Alexander von Humboldt Foundation.

The finding sheds additional light on what kinds of animals lived on what is now Antarctica, Sidor told LiveScience. "Also surprising is the gigantic size of Kryostega," he said. "Finally, it reminds us that the world has not always been like it is today — at times is has been warmer, at times colder."

Antarctica was substantially warmer in the Middle Triassic than it is today, Sidor said, but it wasn't exactly tropical or balmy. Computer climate simulations suggest that it was seasonally very harsh, with periods of complete darkness.

The scientists worked from a fossilized piece of the snout of K. collinsoni, analyzing structures present in more complete skulls for other temnospondyl species that had similar size characteristics.

"The anatomy of the snout tells us what major group of amphibian this fossil belonged to," Sidor said.

Teeth at the edge of the mouth, as well as on the palate roof, were clearly visible, and the presence of structures similar to those that allow fish and amphibians to sense changes in water pressure led the researchers to conclude that the species was aquatic.

The fossilized piece of snout also contains a nostril, which aided the scientists in judging proportions of the head when comparing it to other fossils. They estimated the skull was about 2.75 feet long and perhaps 2 feet across at its widest point.

"Kryostega was the largest animal in Antarctica during the Triassic," Sidor said.

The word kryostega translates to "frozen" and "roof," which refer to the top of the skull. The scientists named the species for James Collinson, a professor emeritus of Earth sciences at Ohio State University who made important contributions to the study of Antarctic geology.

Hammer collected the fossil in 1986 from an Antarctic geological layer called the Fremouw Formation. He has studied a number of other Antarctic fossils, including dinosaurs, collected at about the same time, and so the temnospondyl fossil was not closely examined until the last couple of years.

At the time that K. collinsoni lived, all the world's land was massed into a giant continent called Pangea. The area of Antarctica where the fossil was found was near what is now the Karoo Basin of South Africa, one of the richest fossil depositories on Earth.

Sidor noted that in the early Triassic period, from about 245 million to 251 million years ago, just before the period that produced the K. collinsoni fossil, Antarctica and southern Africa were likely populated by largely the same types of plants and animals. While Antarctica was still colder than much of the world, it was substantially warmer than it is today, though it still spent significant periods in complete darkness.

Then, by the middle of the Triassic period, perhaps only half the species were the same in southern Africa and Antarctica, he said, and in the early Jurassic period, around 190 million years ago, unique early dinosaur species were appearing in Antarctica.

"It could be that these animals were adjusting to their local environment by then, and we are seeing the results of speciation occurring at high latitude," Sidor said. "Here we have really good evidence that Antarctic climate wasn't always the way it is today. During the Triassic, it was warmer than it is today — it was warmer globally, not just in Antarctica."