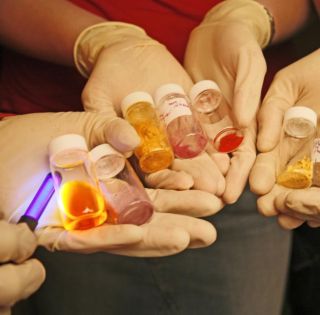 Conjugated polymers don't come in all colors of the rainbow, yet. The idea is to get the chemicals to change color and/or intensity when excited by light (left) or electric current.
(Image: © The College of William and Mary)

Elizabeth Harbron is describing a bit of choreography.

"There are two groups and they start out like this, OK?" she says, right arm out, bent at the elbow, with forearm vertical. Her left arm also is extended, forearm dangling. Both wrists are bent and her fingers are gently curled.

"And in the light, they do this," she nods, crisply drawing her right arm across her body and coiling herself up slightly. "Then…they go back."

Harbron, a photochemist at the College of William and Mary, is talking about the dancing of molecules, not people. She is demonstrating how a group of polymers change shape when activated by light, using her arms to demonstrate the action of azobenzene side chains coiling and uncoiling around a central molecular backbone. The chemically literate will recognize that she is acting out the process of cis-trans isomerism.

Her lab is investigating the properties of conjugated polymers, long-chain molecules that can be made to glow, even change colors, when they convert from cis to trans. The fluorescent properties of conjugated polymers can be activated by light or by electric charge, which makes them good candidates for a new class of commercial-product display screens based on polymer light-emitting diode (PLED) technology.

Conjugated polymers give a number of advantages to displays. Their fluorescent properties make for nice bright, high-contrast readout. This means that future cell phones equipped with PLED displays won't require backlighting. PLED technology is especially appealing for computer monitors. Think of your laptop screen offering 180-degree visibility, even in the sunlight.

"Because this is a polymer, it's plastic, right? In theory, you could make these flexible. So you could imagine some sort of flexible computer monitor," she said. "The technology just isn't there yet, but that's where it's headed."

"We're not going to be making cell phones here in my lab," she said. "My group will never be widget producers, but we're going to learn more and more things about what these polymers can be made to do. What we do may some day help the widget makers."

Harbron's work is based on coming up with new conjugated polymers that have groups attached to them that respond to light signals. "Conjugated polymers will fluoresce if you put electricity through them, but we've focused on light because it's very straightforward and an easy thing to do," she said. The groups of polymers being investigated will fluoresce differently—brighter or a different color—depending on how they are shaped. Her work choreographing azobenzenes, for instance, has revealed that they respond differently to ultraviolet light than they do to blue light.

"If you made them coil up, they would glow a different color than when they're all spread out," she explained. "So I thought wouldn't it be cool if we could force them to do that with a light signal? Just say 'do it now' and 'now go backwards'."

She characterized her lab's work with azobenzenes as "finding out what we could do." They discovered, for instance, techniques for changing the color of a conjugated-polymer solution, making the liquid change from yellow-orange to green and back again. She also has developed an approach to fluorescence modulation—a way to make the polymer glow brighter and dimmer.

"Once you can talk to the azobenzenes and figure out how to make them brighter and dimmer, you ask, 'OK. Now, can we go completely on, completely off, just with a light signal?'" she asked. "And that's one of the places we're headed."

Basic investigation of the properties of any conjugated polymer begin in solution, as it's easier to observe and record characterizations, but work on promising molecules must quickly advance to the film state.

"Because film's where it's at,” Harbron said. Commercial conjugated-polymer applications would consist of a layered display screen, with the polymers suspended in a thin liquid film sandwiched among conductive layers to provide electricity and insulating layers to keep oxygen from the polymers. "Anytime anyone reviews one of my papers, they'll say, 'Well this is all really great and everything, but how does it work in the film?'"

Harbron's group recently published its first "film" paper, describing how some of the actions demonstrated by azobenzenes in solution happen in almost the same way in a film roughly 100 microns thick.

"We did not know if there would be enough room in the film for the molecules to coil and uncoil," she said, "but it turns out that there is."

A CAREER grant from the National Science Foundation will allow Harbron and her company of undergraduate chemists to advance to the next level, including the pursuit of groups beyond azobenzenes. "We want to take the effects we have and try to make them stronger, by swapping out the azobenzenes with other kind of photoactive molecules," she said. "The one we're looking at now is called spiropyran."

"That may help us achieve the total intensity-on/intensity-off effect that we're looking for," she said. "It also may help us do some fancier and more dramatic color-change applications."