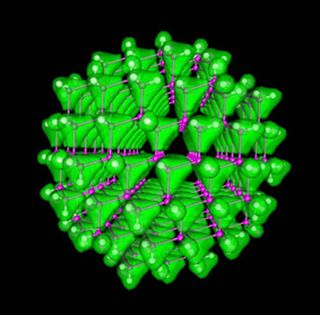 A theoretical model of a quantum dot made out of the semiconductor material gallium arsenide. The dot contains just 465 atoms.
(Image: © Lin-Wang Wang/Lawrence Berkeley Laboratory)

The strange behavior of quantum physics might seem too unpredictable to rely on for our energy needs, but new technologies hope to capitalize on its very strangeness.

The most familiar of these quantum tricks is the fact that light acts both like a wave and a particle.

This dual nature is utilized in solar power technology. Incoming sunlight is concentrated by mirrors and lenses that rely on the wave-like properties of light. Once inside a solar cell, however, this focused light collides with electrons in a particle-like way, thus freeing the electrons to create an electric current.

The next generation of solar cells may employ tiny bits of semiconductor material called quantum dots. These nanometer-sized devices are so small that only a handful (anywhere from 1 to 1,000) of free electrons can reside inside.

Because of these cramped quarters, a quantum dot behaves like an artificial atom in that its electrons can reside only at specific (so-called quantized) energy levels. These levels define exactly what wavelengths of light the dot will absorb.

"Quantum dots have a host of unusual properties compared to bulk semiconductors," said Arthur Nozik of the National Renewable Energy Laboratory, part of the U.S. Department of Energy. He and his colleagues are looking at how a single light particle (or photon) can enter a dot and excite several electrons, rather than the usual one.

Other researchers are looking to tune the wavelengths at which a dot absorbs light by making it bigger or smaller. Solar cell manufacturers may one day be able to mix together dots of different sizes to absorb sunlight along a wide range of wavelengths.

A quantum wire is like a quantum dot stretched out along one direction. In certain cases, this narrow conduit — 10,000 times thinner than a human hair — can be very good at conducting electricity, as the electrons tend to move in a more orderly fashion down the wire.

One way to make quantum wires is with carbon nanotubes, which are small rolled-up sheets of hexagonally-bound carbon. Discovered in 1991, these nanotubes are beginning to show up in all types of applications, including better energy storage.

As one MIT group has shown, it is possible to make a souped-up capacitor from carbon nanotubes. The researchers grow the nanotubes close together — in what is likely the world's tiniest shag carpet — to increase surface area inside the capacitor.

The resulting "ultracapacitor" could store as much as 50 percent of the electricity that a similarly-sized battery can, the scientists claim. This might be ideal inside an electric car, as capacitors are more durable and can charge and discharge much faster than batteries.

Although quantum wires can be good conductors, another quantum substance is the best.

Superconductors are materials in which the electrons pair up to carry the current. This pairing is unusual because electrons typically repel each other, but quantum physics overcomes this and, in so doing, reduces the electrical resistance in the superconductor to zero, or very close to zero.

Resistance is what makes a wire get hot when it carries electricity. Power companies typically lose about 7 percent of their energy to heat caused by resistance in transmission wires.

Superconducting wires could help reduce this waste. The trouble is that superconductors only work at extremely cold temperatures.

For example, the longest superconducting cable system for transmitting power — installed earlier this year along a half-mile stretch of the Long Island power grid by American Superconductor Corporation and its partners — must be surrounded by liquid nitrogen to keep it at minus 330 degrees Fahrenheit (minus 200 degrees Celsius).

American Superconductor is also working on applying its superconducting wires to offshore wind turbines, in order to make them smaller and more efficient.

One good way to use all this quantum-derived electricity is to turn on a light-emitting diode, or LED, which works like a solar cell but in reverse.

Electric current going through the diode causes electrons to jump across a barrier between two types of semiconductor material. The jumping electrons then fall into lower energy states, emitting a photon.

Because the wavelength of this emitted light is in a very narrow band, there is not a lot of wasted energy emitted in the infrared, as is the case for normal incandescent light bulbs. An LED's efficiency is even better than that of compact fluorescents.

LEDs are now being made into full light fixtures that can replace normal bulbs. Their extra cost can be offset by lower electricity bills.

In the energy saving business, every quantum bit can help.