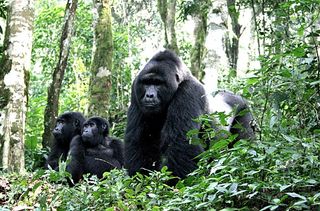 In gorillas, males are much larger than females as a result of competition to control access to mates. Paranthropus robustus, a extinct relative of humans, showed a similar pattern of sex differences, and an extension of growth in males that also occurs in gorillas.
(Image: © Ron Ritchie)

Humans basically court each other one-on-one today, but 2 million-year-old skulls tucked away in South African caves suggest that our ancient male relatives dated troops of females.

The bones belonged to Paranthropus robustus hominids, mostly males. These extinct human relatives split away from our evolutionary track about 2.5 million years ago. Scientists said the preponderance of male skulls, located in what were likely lairs of hyenas or leopards, offered a clear view into our close relative's social world.

"That's a major clue because it tells us males are at greater risk of predation," said Charles Lockwood, a paleoanthropologist at the University College London. "You see this kind of death trend with other primates, where dominant males cast out the competition. Most of the specimens in our sample were the equivalent of young adults, 18 to 19 years old."

Pushed away by heavyweight male suitors, Lockwood thinks younger males lived a solitary life, effectively exposing themselves to predators outside of group safety that females had. That, Lockwood said, is evolutionary selection in action for bigger, impressive males living in with a resident group of females.

"Males being selected for were the equivalent of dominant silverback gorillas," Lockwood said, effectively dwarfing their female companions—and rivals. "The dominant males survived to pass on their genetic heritage while others risked a greater chance of death."

Lockwood and his colleagues' findings based on the 35 fossilized specimens are detailed in the Nov. 30 issue of the journal Science.

Recent estimates of P. robustus suggest mature females were probably light at 65 pounds (30 kilograms), while dominant males weighed up to 130 pounds (60 kilograms) after five or six years of growth. Lockwood said these estimates are certainly close, but future access to bones other than skulls "would be fantastic" for better estimates.

"Predators always ate the good parts," he said; hungry animals left the thick, hard-to-bust skulls behind, preferring to munch on narrower bones with nutritious marrow inside. "But it's possible that we'll eventually find a cave or pit were P. robustus fell in. That might preserve most of the bones."

Lockwood said comparisons of the skulls and skull fragments added more evidence of a gorilla-like mating society: The males kept ballooning in size beyond sexual maturity, unlike human males that taper off soon afterwards.

"If you take that pattern and exaggerate it a lot [in humans], you can get an idea of what the [P. robustus] males would have looked like," he said. "Continue developing a man as these creatures did, and you'd end up with a 9-foot-tall, 250-pound human gorilla."

Although the tough-guy males shooed away their wimpier competition toward isolation—and hyena and leopard food—Lockwood said all was not lost for the little guy.

"Young males were certainly not waiting around for five years to mate," Lockwood said. "They were probably making every effort, and they might get lucky, in a literal sense, every now and then."