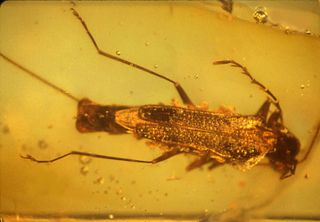 The discovery of a bug that roamed with the dinosaurs has shown that insects were equipped with chemical weapons much earlier than thought.

When scientists at Oregon State University examined a preserved beetle specimen sent in from Burma about a year ago, they were surprised to see a chemical oozing from its side abdomen.

Turns out, the beetle was in the midst of fighting off an aggressor when a sticky wad of sap fell on it right as the beetle fired acid at the attacker—providing researchers with a frozen glimpse of a 100 million-year-old battle for survival.

"The chance of these circumstances all coming together at the exact right second was pretty slim," said researcher George Poinar, Jr. "It’s quite remarkable."

What's even more remarkable, he says, is that this finding pushes back the known existence of this type of beetle by about 60 million years, making it the earliest fossil record of chemical weaponry in animals.

In their findings, published in the August issue of the Journal of Chemical Ecology, the researchers concluded that the insect was most likely a member of an extinct soldier beetle species which was an ancestor to the modern soldier beetles, which pack similar kinds of ammunition.

Soldier beetles are omnivores and munch on other tiny bugs as well as plant pollen, which often left them exposed.

"A beetle who is feasting on a flower is going to be wide open to predators. So it must have something to help it survive better," Poinar said. "That this type of defense has been preserved through 100 million years of evolution is evidence that it works pretty well."