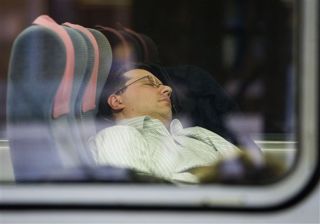 The research, detailed in the April 1 issue of the journal SLEEP, measured the quantity of the primary male sex hormone in 12 healthy men, ages 64 to 74, following a night of sleep in a laboratory environment. Diminished sleep was the best independent predictor of drops in testosterone, the researchers found. Testosterone levels are highest in the morning.

The small research sample does not represent the overall population of older U.S. men, making the results "suggestive, not conclusive," said Lawrence Epstein, medical director of Sleep HealthCenters in Brighton, Mass., and past president of the American Academy of Sleep Medicine.

"You'd be surprised that sleep can interfere with hormonal secretion and things we presume are part of aging," Epstein told LiveScience.

The men in the study slept anywhere from 4.5 hours to 7.8 hours, a figure that correlates fairly well with the amount they tended to sleep at home, wrote study leader Plamen Penev of the University of Chicago.

Testosterone is a steroidal hormone and plays a key role in libido, energy, muscle mass, bone density and immune function. Adult males produce about 20 to 30 times the amount of the hormone as adult females.

Scientists already knew a little about the relationship between sleep quality, aging and sex hormones.

For instance, men's testosterone levels drop by 1 to 2 percent a year starting in their 20s or 30s. Drops in male sex hormones are a problem for bone density and metabolism. And sleep loss has been shown in young men to diminish their sex hormone levels.

Instead, men and women should set aside the amount of time needed to get a good night's sleep.

"A lot of sleep deprivation is volitional," Epstein said. "People choose to stay up later, watch TV, be on the internet, do other things than get enough sleep."

Some sleep disorders can lead to sleep deprivation, he said, and these become more common as we age. So doctors and patients should do a better job of detecting disorders and getting them treated—with airway opening machines and other options for apnea, medication for movement disorders, and pharmaceutical and behavioral approaches for insomnia, he said.