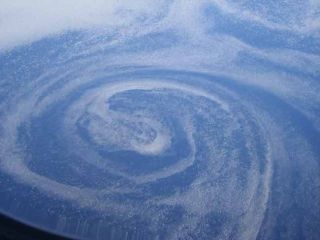 An oceanic eddy or vortex over the marginal ice zone near Greenland. The oceanic circulation can be seen in the movement of small ice floes on the surface.
(Image: © Kent Moore)

Greenland is not known for hurricanes, but the frigid land mass does host some of the strongest—and most mysterious—winds on the planet. Now scientists say the bizarre winds could be linked to weather and climate phenomena far from the icy realm.

After two weeks of flying head-on into hurricane-force winds that whipped recently around the southern tip of Greenland, a group of scientists has a better idea of just how these winds relate to broader weather patterns, global ocean circulation and climate.

Weather experts have only really known about these so-called tip jets for less than a decade, and most of what they knew was from satellite data. The team of scientists, as part of the International Polar Year effort, recently sought  to go airborne for a close-up look at the roaring winds.

Tip jets form at Greenland when cyclones, large rotating weather systems, meet with the island's hulking mass on their northward journey across the Atlantic Ocean, causing  air flow to be distorted and winds to speed up.

“The air is forced to move around the obstacle, [which] causes these accelerations of the wind,” said study team member Kent Moore of the University of Toronto.

These accelerations are created in the same way as a plane gains lift. The plane’s wing diverts the air into two directions: air traveling over the top of the wing flows over a curved surface, while air flowing under the bottom travels over a flat surface; because the curved surface creates a longer path for the air to travel, the air must speed up to meet up with the wind flowing over the top.

“The air parcels that are forced to go around Greenland have a longer path than [parcels] that go over it, for instance. And because they have to all meet up at the end, the ones that go around have to accelerate,” Moore explained.

This dual wind behavior is highly unusual: in the United States, for example, large-scale winds blow primarily from the west, while winds from the east are rare except on local scales where mountains or other landforms control the flow.

“Cape Farewell is this really odd place where you get really strong winds of both directions, and that’s very rare. There’s very few places in the world where the winds blow very strong from two different directions,” Moore said.

What makes these narrow jets of sometimes 100 mph winds so important? They could be one of the drivers of the ocean’s main circulation.

On the global conveyor belt’s path, warm water from the tropics flows northward to the pole, where it becomes denser and sinks to the ocean floor, and then returns to the tropics. The water’s density increases as it becomes colder and saltier—winds blowing over the water can transfer heat and moisture away from the surface waters, which is what Moore suspected the tip jets were doing.

“This experiment was to test the hypothesis that we could actually get enough heat and moisture transfer between the ocean and the atmosphere in these tip jet events to actually trigger convection in the ocean,” Moore said.

Turbulence in the air near the ocean’s surface are the mechanism for the heat transfer, just as bubbles transfer heat in a pot of boiling water.

“There’s all these little eddies, or little turbulent activity, and that’s actually the thing that is transferring the heat from the ocean into the atmosphere,” Moore said.

Though Moore’s results are not yet final, it appears as if enough heat is transferred to cause the ocean water to overturn, he said.

As the tip jets form when a cyclone travels by Greenland, the cyclone itself is affected by the frozen mass: “If Greenland wasn’t there, the cyclones would have a very different track,” Moore said.

But because Greenland is in the way, the cyclones diverge into different directions.

“These cyclones are being distorted by—it’s kind of a Catch-22—but they’re sort of being affected by the presence of the ice mass modifying how they deliver precipitation to the ice cap.”

Moore hopes that by clarifying the role the tip jets play in driving ocean circulation and how the cyclones that create them affect Greenland’s climate, a better picture of just how climate change is affecting the island will come into focus.