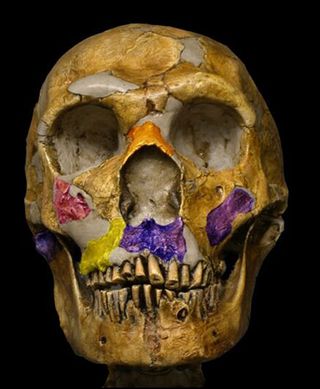 Anthropologists scrounged around museum halls to put together bones from various specimens to make the first Neanderthal skeleton. And the result surprised them: "As we stood back, we noticed one interesting thing was that these are kind of a short, squat people," said Gary Sawyer of the American Natural History Museum in New York. "These guys had no waist at allâ€”they were compact, dwarfy-like beings." Meantime another team announced plans to reconstruct the Neanderthal genome from fossil fragments.

Neanderthals might have held out in isolated refuges for thousands of years longer than previously thought, scientists reported today.

Their survival at what seems to have been their last refuge in Gibraltar for far longer after the arrival of modern humans than once believed suggests our ancestors may not have driven the Neanderthals to extinction. Instead, researchers speculate the Neanderthals fell victim to a cooling of the climate that deteriorated their environment too rapidly for them to adapt.

"While the rest of where they lived was getting colder, down here at the southernmost tip of Europe there were still little pockets of Mediterranean climate, so the world of the Neanderthals there didn't change that much," researcher Clive Finlayson, an evolutionary biologist at the Gibraltar Museum, told LiveScience.

This now prolonged span of time in which modern humans and Neanderthals could have interacted reopens possibilities they might have interbred, experts added.

The researchers investigated Gorham's Cave, where Neanderthal stone tools such as spear tips were found more than 50 years ago. Neanderthal tools differ from those of modern humans by the way the rock was chipped off and trimmed and by their very size and weight.

"Neanderthals were more like wrestlers, while modern people are in comparison more like long-distance runners," Finlayson explained. "Neanderthals made heavy spears for close quarter ambush hunting of large animals such as rhinos or elephants. Tools of modern people were lighter and perhaps more portable for people who were on the move."

By carbon-dating charcoal from hearths newly excavated at Gorham's cave, the scientists found Neanderthals might have survived there until 28,000 years ago, and maybe as recently as 24,000 years ago.

While the rest of Europe was cooling, the area around Gibraltar back then "resembled a European Serengeti," Finlayson said. Leopards, hyenas, lynxes, wolves and bears lived amongst wild cattle, horses, deer, ibexes, oryxes and rhinos, all surrounded by olive trees and stone pines, with partridges and ducks overhead, tortoises in the underbrush and mussels, limpets and other shellfish in the waters.

This natural richness of wildlife and plants in the nearby sandy plains, woodlands, shrublands, wetlands, cliffs and coastline probably helped the Neanderthals to persist, he added. Indeed, evidence at the cave shows the Neanderthals likely used it as a shelter on and off "for 100,000 years," Finlayson said.

As the climate cooled, the forested and semi-forested areas Neanderthals were best adapted to were replaced in Europe by tundra from the north and steppe from the east. Modern humans, who were more mobile, might have been better suited for the open expanses of these terrains.

"The key was physique, which for Neanderthals did not change fast enough," Finlayson said.

These new findings suggest Neanderthals survived after modern humans moved in, and as the environment changed due to climate shifts, Neanderthals faded away.

If Neanderthals lasted longer than once thought, the question of whether Neanderthals and modern humans interbred is raised again, said paleoanthropologist Eric Delson at the American Museum of Natural History and at Lehman College in New York.

Past digs had uncovered what some researchers claimed was the skeleton of a hybrid child. "How could there be a hybrid, if the last Neanderthal died out thousands of years before this child was born? But if it can be shown that Neanderthals were still living near Gibraltar some 24,000 years ago, that part of the hesitancy disappears," Delson said. Still, he added, questions remain about whether the skeleton really does resemble a Neanderthal's.

Future research can delve deeper into Gorham's Cave or other nearby caves, Finlayson said. "They might be lucky enough to find some Neanderthal fossils, which would help document who made the artifacts," Delson said.

Finlayson and his colleagues reported their findings online today via the journal Nature.