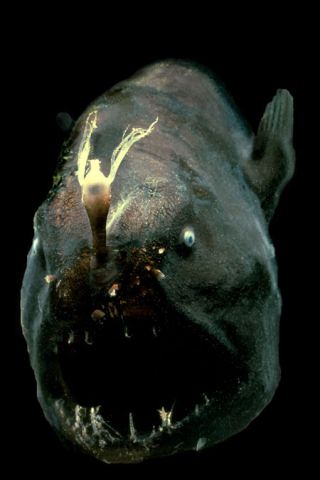 The MAR-ECO program strives to learn more about pelagic fishes, such as this deep sea dwelling anglerfish.

Mysterious and seemingly monstrous beasts stalk the gloomy depths of the Atlantic Ocean, the so-called midnight zone where virtually no sunlight reaches. Temperatures are near freezing and the space between one creature and another can be vast.

Scientists know very little about the species that inhabit this uninviting world more than a mile below the ocean's surface. For years it was believed that many of these fish nomadically wandered the ocean, munching on the organic debris that sinks from shallower waters.

Now, a massive marine expedition has uncovered the secret sex lives of these fish, revealing that they may gather at underwater mountains to spawn. And the ecosystem turns out to be far richer than thought.

Deep-sea fish that spend the bulk of their lives swimming in open water are known as pelagic fish. Few large-scale expeditions have been dedicated to studying these creatures, and most species knowledge comes from what turns up in trawling nets.

In fact, scientists know so little about these fish that 50 percent of the animals collected from deeper than 3,000 meters (1.86 miles) turn out to be unidentified species.

Little is known about how they reproduce. Assuming the fish are few and far between down there, how do they rendezvous to allow a species to thrive?

The evidence comes in the form of images of a mysterious "scattering" layer derived from acoustic surveys 2,000 meters (1.24 miles) down. Swim bladders and eggs tend to produce defined, detectable acoustic signatures.

"This is the first time anyone has suggested that deep-sea pelagics form groups to spawn and then disperse again, which would require some homing ability or knowledge," said Tracey Sutton of the Harbor Branch Oceanographic Institution. "But I can't even speculate yet on what the trigger would be."

Beasts of the deep

Typically small, many pelagic fish have frightening, otherworldly looks. Some have giant fangs while others use malicious entrapment devices to catch prey. Many produce fluorescent light. Scientists give them names like "vampire fish from hell" and "saber-toothed viperfish."

However, the team hauled up a number of exceptionally large, rare fish, including some of the largest dragonfishes and anglerfishes ever collected. Anglerfishes typically fit in the palm of your hand, but one sample tipped the scales at 35 pounds.

They also caught a species of whalefish known only by one 1975 specimen. Limited species sampling, Sutton said, leads to classification difficulties. In some cases, male, female, and juveniles of the same species are classified as three separate species.

The MAR-ECO team also observed lush growth on the ridge, giving it the appearance of a saltwater oasis.

"The bottom was stunning," Sutton said. "There was far more growth and coral than we could have imagined. It looks like a tropical coral reef down there in places."

Findings from the MAR-ECO research and other projects could help conservation efforts for these rich ecosystems, which are endangered by deep-sea trawling activity, the researchers say.