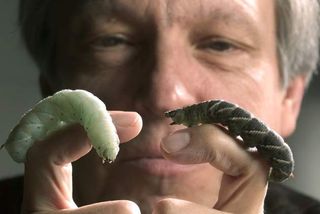 Frederik Nijhout with the polyphenic hornworms that evolved to two colors in his lab.
(Image: © Duke University)

Scientists have forced a little evolution in the laboratory, controlling whether a caterpillar becomes green or black.

The color of the critter was made to vary with temperature during their development. The experiment reveals the basic hormonal mechanism underlying the evolution of such dual traits, the researchers report in the Feb. 3 issue of the journal Science.

The study was done on Manduca sexta, a caterpillar commonly called the tobacco hornworm. Its larvae are normally green. A related species, Manduca quinquemaculata, becomes black or green depending on temperature. The idea was to use similar temperature shocks to evolve a similar change in M. sexta.

Similar differences show up in genetically identical ants, which can develop into queens, soldiers, or workers based on the hormones they're exposed to early in development. Similar hormonal differences can affect the specific color of a butterfly or bird.

Scientists have not understood evolution's exact role in the differences.

"There had been theoretical models to explain the evolutionary mechanism -- how selective pressures can maintain polyphenisms in a population, and why they don't converge gradually into one form or another," said Duke University graduate student Yuichiro Suzuki. "But nobody had ever started with a species that didn't have a polyphenism and generated a brand-new polyphenism."

Suzuki and biology professor Frederik Nijhout worked with black mutants of the normally green M. sexta. The mutants have a lower level of a key hormone.

The scientists subjected the black mutants to temperatures above 83 degrees Fahrenheit, and over a few generations two types developed. One group turned green and the other didn't.

Importantly, the two groups were found to have distinctly different levels of the hormones.

They then found that they could create green spots on black caterpillars by applying drops of the hormones at the right stage of development. And by thwarting the flow of hormones from head to body—they applied a little caterpillar tourniquet—they could prevent the greening.

None of this looks to be going anywhere in the sense of survival of the fittest. The black and green caterpillars will all grow up basically the same.

"The adult moths are identical, and so there is no obvious basis for the kind of selective mating that might genetically isolate two groups and eventually lead to new species," Nijhout told LiveScience. Because the variations are based on temperatures, and thus in the wild would be dependent on seasons, the two types would tend to occur at different times of the year and may never meet in nature, he said.

The next step, the researchers said, is to see if the variations do indeed occur in the wild.