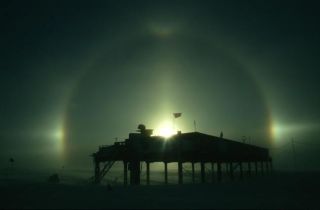 Signs of global warming are three times more apparent in Antarctica than across the rest of the planet, a new study shows.

Using newly digitized temperature, humidity, and wind data collected from instruments aboard weather balloons between 1971 and 2003, scientists found a winter season warming throughout the Antarctic atmosphere.

The scientists estimate that atmospheric temperatures over Antarctica in the winter have risen by about 2.7 degrees Fahrenheit (1.5 Celsius) in the last 30 years, and the change is due in large part to greenhouse gas emissions.

“Greenhouses gases could be having a bigger impact in Antarctica than across the rest of the world and we don't understand why," said John Turner of the British Antarctic Survey.

Other studies of the region focused only on surface temperature variations and produced mixed results. One study found significant warming only on the western side of the Antarctic Peninsula but not elsewhere in the southernmost continent.

Another previous study even suggested that parts of Antarctica were cooling in recent decades while the rest of the globe was warming.

Unlike these other studies, the current one looks at temperature variations away from the Earth's surfaceand also covers a wider area.

Analyzing nearly continuous data collected from nine weather stations over the past 30 years, the researchers concluded that Antarctica's air is indeed heating up.

Turner warns that the warming could affect Antarctica's snowfall and sea level in ways not predicted by current models.

"Current climate model simulations don't reproduce the observed warming, pointing to weaknesses in their ability to represent the Antarctic climate system," he said. “Our next step is to try to improve the models."

The study is detailed in the March 30 issue of Science.