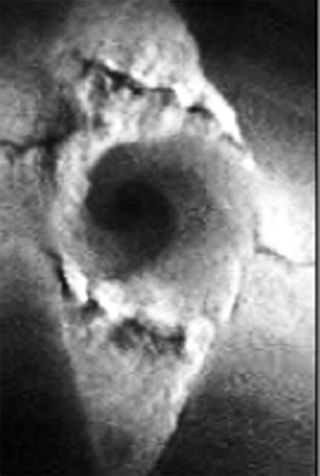 Spinning like giant LP records on the ocean floor, microplates are one of the least understood features of plate tectonics - the branch of geology that explains continents, mountain ranges, earthquakes and more, by the shifting and crashing of the Earth's landmasses.

About a dozen microplates are known, mostly in the Pacific Ocean. They grow over time - some reaching hundreds of miles across and rotating about 15 degrees every million years.

"They are a curious feature," said Richard Katz from Columbia University's Lamont-Doherty Earth Observatory. "In a world where most plates are converging or diverging in a linear fashion, these plates are spinning."

Microplates, which are relatively small compared to the major plates, are found at mid-ocean ridges, where two larger plates are pulling apart and new crust is formed.

How these microplates are born has perplexed scientists since their discovery in early 1970's. Katz and his collaborators have revealed some clues to the mechanism by studying a wax model of spreading plates.

At first blush, a wax model might sound a bit unsophisticated, like a baking soda volcano, but microplate-like structures form readily in the wax, whereas trying to reproduce these spinning plates in computer simulations has proved difficult.

"One of the complicated things about microplates is that we don't know much about them dynamically," Katz told LiveScience in a telephone interview. "To do a computer model, you need to know the forces involved."

To get a better handle on microplate physics, Katz and his fellow researchers have shown that their wax models reproduce key properties of the ocean floor.

Microplates were discovered by their unusual magnetic and topographic patterns that showed up near mid-ocean ridges.

In general, a mid-ocean ridge spreads apart like two conveyor belts, with molten rock from the interior freezing onto the edges of the separating plates.

Therefore, the age of the underwater rocks increases with distance from the ridge. One consequence of having geological time printed on the seafloor in this way is that tiny magnets in each rock were frozen in the direction of the Earth's magnetic field at the time the rock formed.

This would not mean much, except for the fact that the Earth's magnetic poles have flipped several times in the past.

"The reversing magnetic field is recorded in the crust when it freezes," Katz explained. "It is like a tape recorder."

This tape recorder has been measured in magnetic studies of the ocean floor. Rocks of a certain age all have compasses frozen in one direction. The same recording happens on the microplates, but they are spinning so "instead of parallel stripes, you get a fanning pattern," Katz said.

The other signature of a microplate is a swirling, spiral shape in the rise and fall of the ocean floor. Similar spiraling is clearly visible in the thickness of the wax model.

Wax has been used for several decades as a model of plate spreading. One reason is that wax has a convenient boiling point.

"You can work with temperatures that won't burn your skin," he said.

The solid form of wax is also brittle like that of the lithosphere - the solid outer shell of the Earth that constitutes the plates.

Katz and his colleagues have constructed a model in which a slab of wax is heated from below, cooled from above, and pulled apart slowly. That's all it takes to make microplates form.

A video can be seen here, accompanying the full article from the New Journal of Physics.

Evidence that the wax microplates are a good analogue of their rocky counterparts comes from how well the former can be scaled up to the latter. The researchers found that five seconds in the lab corresponds to about a million years on the Earth, while 0.04 inches (1 millimeter) along the wax is equal to about 30 miles (50 kilometers) on the ocean floor.

Beyond the dependency on the spreading rate, the ease with which the wax model formed microplates suggests there is nothing special about the molten interior of the Earth, nor the cold ocean above, that allows for the formation of microplates.

Therefore, these spinning features may have formed on other planets or moons with tectonic activity.

"It is a pattern that results from spreading plates," Katz said. "If you are looking for evidence for plate tectonics on another planet, you can look for similar patterns."

Earthquakes in Your Future

Central US Warned of Larger Earthquakes to Come

Earthquakes Stopped, But Only In Lab

The Odds of Dying