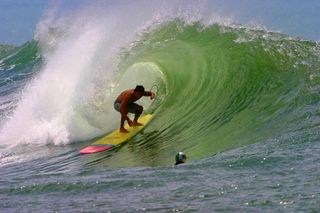 Surfing for 30 minutes is associated with an increase in positive feelings and tranquility and a decrease in negative feelings as well as fatigue.
(Image: © dreamstime)

SAN DIEGO – Catching a wave can do more than give you a paddling workout. It also boosts mood, according to a new study.

The results show going surfing for 30 minutes is associated with an increase in positive, upbeat feelings and a decrease in negative feelings as well as fatigue.

While the study was conducted on a general surfing population, the findings were true regardless of how frequently people surfed, how old they were and what their skill level was.

The results might not come as a surprise to those who surf.

"If you ask any surfer, he or she guaranteed will tell you, 'Oh man I feel a lot better after I get out,'" said study researcher Ryan Pittsinger, a doctoral student at the University of Iowa and a surfer himself.

Previous research has shown physical activity, such as running and cycling, can have a positive effect on mood, in some cases reducing depression and anxiety. However, most studies involve college-age participants and none had focused on surfing to see if the same held true.

"This study really puts surfing on the map as far as a sport that has beneficial psychological effects," said Pittsinger, who conducted the work while at California State University in Long Beach, Calif.

The study was presented Thursday in a poster session at the 118th Annual Convention of the American Psychological Association.

Pittsinger and his colleagues recruited 107 participants — identified by the fact that they were carrying a surfboard — from the shores of Manhattan Beach, Calif. Ages ranged from 18 to 58, and 85 percent were male.

They completed a questionnaire asking them to rate, on a scale of 1 to 5, how strongly they were feeling a particular emotion, represented by words such as "angry," "miserable," "upbeat," and "enthusiastic." After surfing for half an hour, participants again completed the survey.

Surfing not only put subjects in a better mood, it also increased their feelings of tranquility or calmness.

"Because you are out there alone, it's just you, it's really an activity where it allows you to clear your head," Pittsinger told LiveScience.

Pittsinger has found surfing to be a way to relieve stress in his own life.

"It's something that has really been an outlet for me, when I'm having a tough time, or if there's something on my mind, I can jump in the water and feel a little bit cleansed."

Pittsinger is currently conducting a study at Camp Pendletonin Oceanside, Calif., to see if surfing can be used as a therapeutic tool for wounded U.S. Marines diagnosed with combat-related post-traumatic stress disorder (PTSD).

The program, known as "ocean therapy," teaches participants how to surf and to apply skills acquired from surfing and group discussion sessions, including trust, devotion and confidence, to their everyday lives, Pittsinger said. While the data has yet to be analyzed, anecdotal reports have been very positive, Pittsinger said. The ocean therapy program is carried out by the Jimmy Miller Memorial Foundation.