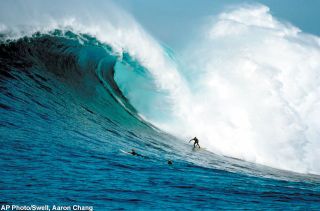 Catching a wave is safer than you think, dude, a new study suggests.

Dramatic images of wipe-outs have pegged surfing as a relatively dangerous sport over the years. But a first-time careful count of surfing injuries found that the sport is actually safer than college soccer and basketball.

There are about 19 injuries per 1,000 hours of participation in men's college soccer and 9 injuries for the same time frame for basketball players.

"We found that competitive surfing has a relatively low risk of injury--6.6 significant injuries per 1,000 hours of surfing--compared to other sports for which comparable data is available," said Andrew Nathanson, a Rhode Island Hospital physician who is the lead author of the new study. "However, the risk of injury more than doubled when surfing in large waves or over an area with a hard bottom."

The researchers assessed the number of injuries at 32 professional and amateur surfing contests. For every acute injury--those that kept the surfer out of the water for a few days or resulted in a hospital visit-- Nathanson and his colleagues recorded how the participant was injured and treated, as well as surf conditions such as the wave size and bottom type.

The researchers found that because professionals performed more tricks while ripping and moved more aggressively--moves that help them gain points in competitions--they suffered strains in their lower extremities, such as in the knees.  Amateurs, however, suffered mostly from bruises and cuts typically caused by contact with a surfboard.

"The fact that cuts were found to be less common among surfers during a competition makes sense since it's a more controlled environment compared to a recreational surfing-type atmosphere," Nathanson said.  "In competitions, there are a limited number of surfers in the water during each heat, and the skill level is very high. On the other hand, recreational surfers are often trying to catch waves in a dense crowd of surfers of varying abilities."

The study is detailed in the Jan. 2007 issue of the American Journal of Sports Medicine.