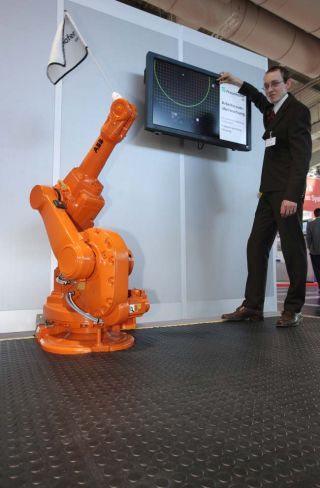 Strange as it sounds, the main problem with the army of killer robots that I'm training to take over the world is that they just aren't sensitive enough.

Mind you, I'm not trying to get them to watch any lifetime original movies with me (though I wouldn't complain if they wanted to), I just want to make sure they can perceive tactile stimulation.

Thanks to some recent work from the Fraunhofer Institute for Factory Operation and Automation, allowing my deadly automata to feel might be easier than I thought.

In developing a safe mechanical assistant for their lab, Markus Fritzsch and colleagues vested their helper robot, LiSA, with the ability to feel pressure.  This means that if LiSA runs into a human coworker, she can back off to avoid catastrophe.  Of course, "avoid catastrophe" is pretty far down on my to-do list.

What gives Fraunhofer's futuristic Fräulein her sense of touch is a pressure-sensing foam skin that covers her moving parts.  Since LiSA's construction in 2008, researchers at Fraunhofer have developed even higher-tech versions of their robot epidermis.  The skin can be breathable or waterproof, and flexible enough to cover any surface, even (hopefully) a surface that is outfitted with whirling blades of doom.

Oh, and Fraunhofer isn't the only organization helping robots to feel.

At the University of Tokyo, Tsuyoshi Sekitani leads a team working on a stretchable skin that can sense temperature as well as pressure, while the UK company Peratech is developing a system with even greater pressure sensitivity using quantum tunneling technology.

"But why," you might ask, "would you need your robots to be able to feel pressure as they terrorize humanity?"  That's a very good question.

The practical problem with using robots to terrorize humanity is that for all their heartless efficiency they're as clumsy as baby giraffes.  You can outfit your robot with all the lasers in the world and it'd still get stuck in a revolving door.  Vision simply isn't enough to help a robot wreak havoc on unsuspecting citizens; it needs a sense of touch or else it's just an awkward teenager firing a death ray for the first time.  But thanks to the Fraunhofer institute, I think my robots will be able to walk on their own.

Mad scientist Eric Schaffer has one index finger on the "fire death ray!" button and his other index finger on the exciting pulse of scientific research. His accounts of diabolical machinations, as well as research breakthroughs, will appear regularly on LiveScience, starting today.